Where the Action Is

Most of what activity there was in Halifax Harbour today could be seen from Point Pleasant. With dredging still underway off  pier 42, the vista was narrowed somewhat but didn't impede traffic, except for the request to minimize wake while passing. 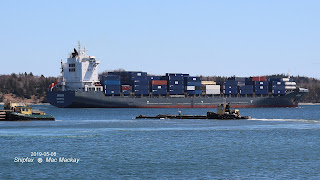 Oshawa with the loaded scow S.11 heads for the dumping ground in Bedford Basin, and J.F.Whalen moves S.12 into position to load as Artemis gets away frompier 42..

The tug Spitfire III comes along with Hoegh Chiba inbound.


The autocarrer Hoegh Chiba arrived, but not for the usual destination for such ships. This time the vessel headed for Cerescorp's Fairview Cove container terminal. 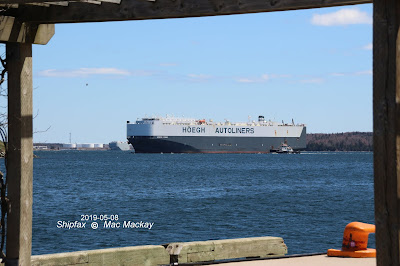 Delhi Highway unloads at Autoport as Hoegh Chiba sails through number one anchorage.

The ship is carrying ACL's RoRo cargo that has been delayed by repairs to Atlantic Sail. ACL is using a combination of pure container, container/RoRo and RoRo ships to meet the demand. Atlantic Sail has been in drydock in Hamburg since April 10.


In 2014 it became Hoegh Chiba again, under the Norwegian International Registry. It has a capacity of 6,000 CEU with a 150 tonne capacity stern ramp. 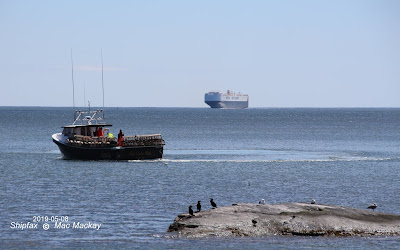 While this was going on lobster fishermen were at work close inshore. They seemed to be doing well, removing a number of the large crustaceans, often two from the same trap. 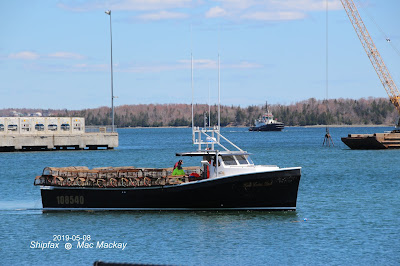 They were using a boat that was new to me, and new to this area. Named Knot Lookin' Back, the boat was built 2018 by Hustler Fibreglass Boats Ltd of Bloomfield, PE, and has the hull lines of a typical PEI type boat. However it is locally owned in Portuguese Cove.


The boat was lifting most of the traps and leaving only a few in the water. It is not the usual boat seen working in this area. That is a smaller unnamed boat powered by an outboard engine. 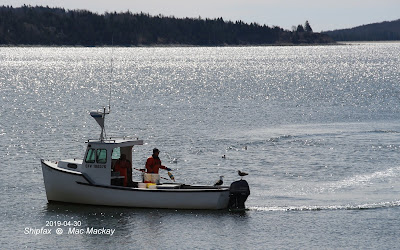 For some reason the usually attentive gulls, were nowhere to be seen when the bigger boat was working today.

The lobster season in Halifax, which is part of the Southwest Nova Scotia region, stretching from Eastern Passage to Yarmouth, lasts from November to the end of May.