It's not as if there has been no activity in Halifax harbour since Friday, but weather has not been conducive - particularly for photography. Here are some highlights. 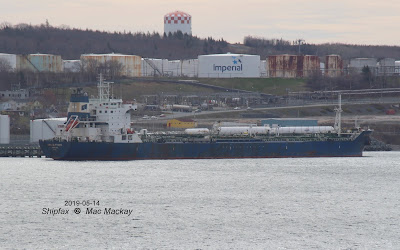 Photo taken Tuesday, by which time some cargo had been discharged. The large white shapes that appear to be on the ship's deck are in fact on shore and are part of Irving Oil's propane terminal. The Imperial tank is actually next door to the Irving facility, and the checkerboard tank on the horizon is part of Canadian Forces Base Shearwater.


The 27,539 gt, 44,787 dwt ship dates from 2001 when it was built by Brodosplit in Croatia as Fulgar. It was very quickly renamed  by European Product Carriers Ltd of Athens, part of European Navigation  Inc. All its product tankers carry the name "Elka"  followed by a Greek geographical or mythological name. 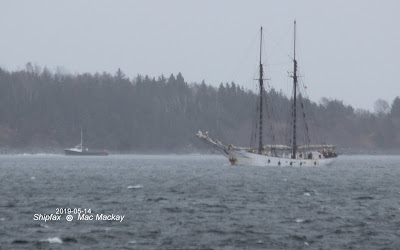 The crew rig tires as fenders as they prepare to berth. Sea conditions outside prevented the pilot from boarding at the usual place, and so it had to lead the vessel in to a point inside Maugher's Beach where it was safe to get aboard. Conditions did not deter lobster fishermen as they enter the final weeks of the season and try to maximize their catch.

Built in 1920 by Otto Schmidt in Stadskanal, Netherlands, the 138 gt vessel plies the world's trade routes with paying crew, transporting cargo (for example coffee) and spends as much time under sail as possible.

On Tuesday pilotage operations were suspended due to extreme high winds and building seas. Operations did not resume until late this afternoon, and even then some ships did not arrive until  after 1900 hrs.

Grande New York was one, and it only became visible through the rain when it was well into the Middle Ground area. 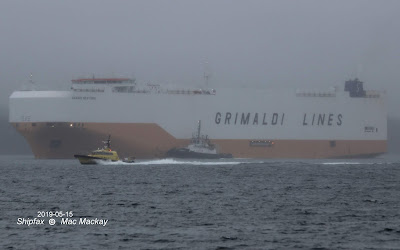 The 62,134 gt, 18,360 dwt ship was last here 13 months ago - to the day. With a 6700 CEU capacity, the ship was built by Jinling, Nanjing in 2017. After off loading some cars at Autoport, the ship will move to pier 31. Its last port was Valencia, Spain, and unusual source for autocarriers, but it likely came from Italy before that.

Also inbound a few minutes earlier, YM Movement was barely visible until it got well into the harbour. 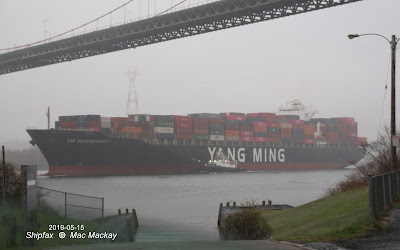 It was still raining heavily when the ship passed under the MacKay bridge. A regular caller on THE Alliance EC5 service, the ship has a 6258 TEU capacity, and measures 71,821 gt, 72,370 dwt. Koyo Dockyard in Mihara, Japan built the ship in 2013.

Last to arrive this evening was the little cruise ship Fram. It sailed from Saint John yesterday, expecting to disembark passengers in Halifax first thing this morning. Instead they spent the day rolling around outside the harbour, before finally tying up about 12 hours late. The ship was to sail this evening, but will now stay in port until tomorrow afternoon. 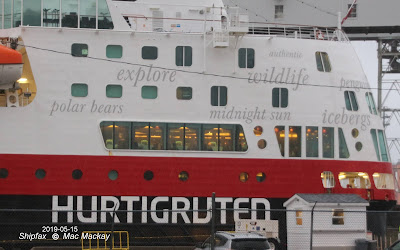 The famous Norwegian coastal passenger line has extended its range to include the arctic and antarctic regions, but so far has bot included Nova Scotia fog and rain as highlights of their cruises.