The Mists of Time

CMA CGM Orfeo spent the afternoon in number one anchorage, most of the time barely visible in a thick mist.  Fortunately the camera sees better than I do, and it was possible to get a photo as it was getting underway to move to pier 41. 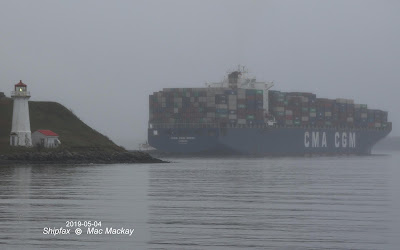 Tugs have gathered alongside the ship to move it to pier 41.
Not too many years ago the George's Island fog signal would have been operating, giving Halifax a minute by minute reminder of the foggy conditions. However complaints from hotel guests resulted in the demise of the horn. Its shed still stands at the foot of the lighthouse.

The main  reason for the move was that before tying up the ship had to undergo an inspection for the presence of Asian Gypsy mother larvae, since it was recently in one of the countries where the pest originates. The Canadian Food Inspection Agency is tasked with preventing the moth from proliferating in Canada where it is especially harmful to our native trees.

Once at anchor the ship awaited the departure of the Zim Vancouver so that it could have all of pier 41-42 to itself, and presumably all four of Halterm's big cranes.

CMA CGM Orfeo dates from 2008 when it was built by Hyundai Heavy Industries at their Ulsan shipyard in South Korea. It is a 111,249gt, 120,892 dwt ship with a carrying capacity of 9658 TEU, including 700 reefers.  Its keel was laid as Santa Laetitia but it was launched as CMA CGM Orfeo and delivered to owners Rederi GP Offen for long term charter to CMA CGM.