The Canadian owned Nordika Desgagnés is making brief visit to Halifax this morning at pier 27. Like many of the Transport Desgagnés ships it spends part of the year operating under foreign flag, and is currently registered in Barbados. Its last port of call is listed as Houston, TX. 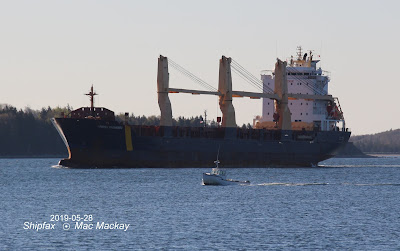 Built in 2010 as BBC Oder by Tianjin Xingang in China, the 12,974 gt, 16,953 dwt ship carries three 60 tonne cranes. Desgagnés acquired the ship in 2017 and it was registered in Quebec City under its new name in June of that year. The timing of the purchase allowed the ship to participate in the northern sealift for that year. It was flagged out again in the fall.

In March 2018 the ship lost its ability to steer east of Louisbourg, NS during a storm. With CCGS Sir Wilfred Grenfell standing by, the tug Atlantic Larch set out to take it in tow. However the first attempt failed and eventually Atlantic Tern secured a line. CCGS Louis S. St-Laurent also stood by for a time.
The ship was eventually tied up at the paper mill dock in Point Tupper, NS. Repairs took considerable time, but the ship was able to return to Canadian flag in June 2018 for sealift work until November 2018 when it reverted to Barbados flag again.

The ship appears to be in ballast and it likely to return to Canadian flag in the next few days.

Update:
It was slightly more than a pit stop for Nordika Desgagnés . In fact it the ship worked cargo all morning, and appeared to be unloading. It was not possible to see what the cargo was, but the ship used its own number 3 crane working the hold immediately forward of the accommodation.
The ship did not take fuel (and did not change tires!), so it was really not a pit stop at all. 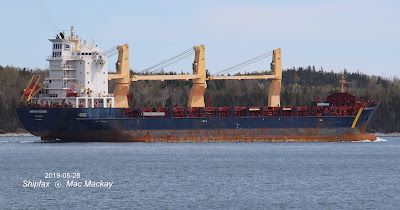 Early this afternoon the ship returned to anchor outside Halifax, probably allowing its charter to run out. Once the charter has expired, the ship will be transferred back to Canadian flag, and will be obliged to sign a Canadian crew.