The former CN Marine / Marine Atlantic ferry Sir Robert Bond is due to leave Sydney Harbour Sunday May 5 in tow, likely for the scrappers.

Filling in while other ships were on refit, Sir Robert Bond sails from North Sydney.

Built by Port Weller Dry Dock in St.Catharines, ON in 1975, the ship had a brief career as an ice class III rail car ferry for CN Marine, operating between North Sydney and Port aux Basques. In 1978 it was converted at Davie, Lauzon to a car and truck ferry, with augmented passenger accommodation to operate between Lewisporte, Cartwright and Happy Valley-Goose Bay, in summer. It still served on the Cabot Strait while other ships were on refit during the winter and early spring. 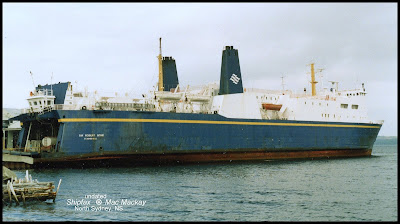 Note the different paint scheme, with white funnel base structure.
The ship is refueling from a tank truck while berthed at North Sydney Lewisporte.

In 1998 the Province of Newfoundland took over Marine Atlantic's local services and Sir Robert Bond remained on the same run until 2010. It then went into winter only service between Corner Brook and Blanc Sablon until 2014 when it was declared surplus. It was kept in "warm layup status" (at a cost of $1mn) in Lewisporte. The provincial government of the day was given to understand it would require $3mn to $5mn to refit the ship. When a new government came in they soon sold the ship for $615,000 plus HST.

In November 2016, new owners Beausejour Peat Moss Inc sent the ship to Burry's Shipyard in Clarenville for a 6 month "life extension" refit, to carry 8,000 bales of peat moss per trip from Cape Tormentine, NB to Canadian and US ports.

Plans apparently fell through, and the ship arrived in Sydport in October 2018. (Burry's shipyard also retreated into Bankruptcy in late 2018).

The ship's Canadian registry was closed January 25 of this year, and it is now apparent that the new owners are sending the ship off to scrap. It will be the end of an era as it is the last ship still in existence from CN Marine's Cabot Strait operations. Marine Atlantic was formed in 1987.