A rapid turnaround in weather gave Halifax a summer-like day and thus the land side of the waterfront was jammed with people and traffic. This imposed serious limitations on photographic mobility, and so coverage of today's port activity is a little thinner than usual.

Late last night the tanker Zephyros arrived and anchored in the lower harbour.  It is not common for these ships to anchor inside the harbor, particularly when the destination berth is unoccupied. Coming from Port Arthur, TX, the ship has refined product for Imperial Oil.

Built in 2013 by SPP Shipbuilding in Sacheon, South Korea, the 29,924 gt, 50,155 dwt ship flies the Panama flag for the anonymous Zefyros Trading SA of Greece. Management of the ship is handled by Benetech Shipping SA, employing a crew entirely of Georgian nationality through Elvictor Ltd, also of Athens. (The pyramidal shape symbol on the funnel is the Benetech logo.)

The ship is expected to move to Imperial Oil by midnight tonight.

Also at anchor for the morning CMA CGM Libra required an Asian Gypsy Moth inspection before it moved to Halterm for noon.

Cerescorp remained busy today, with Atlantic Sun arriving this morning, sailing this afternoon, and its berth taken by MOL Partner soon after.

The Yantain Express did not go to anchor in Bedford Basin last night as expected. Instead it was still working cargo at the west berth through the night. It finally moved to the east berth at 0400hrs this morning. It remained idle today. 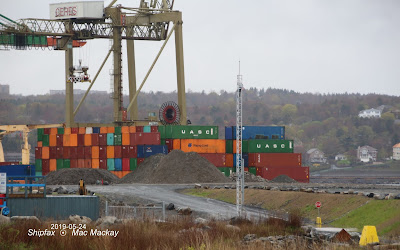 One of the large stacks of boxes offloaded from Yantian Express.

It has been reported that it will take twelve days to unload the Yantian Express's cargo. Containers that have been cleared by the insurers will be arranged on the dock to allow forwarding by rail or ship. Another stack will be created for those boxes for which security has not been posted. Their fate remains unknown.

An unusual Saturday arrival at Halterm was Oceanex Sanderling. It normally sails for St.John's weekly on Fridays. However this week it arrived and sailed on Tuesday, making a quick turnaround at Halterm and Autoport. It will now make another hasty round trip, due to heavier summer demand, sailing early tomorrow morning.

Also from Halterm, dredging work stopped early this week. The last I saw the dredge Derrick No.4 working was on Wednesday. 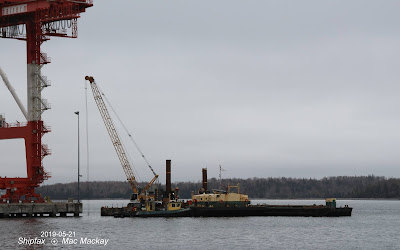 McNally's barges and tugs and other gear are now at pier 9 and pier 9C setting up for construction of the cribs for the Halterm extension. The Port Authority states the extension work will be completed in the first quarter of 2020.