Yantian Express saga - coming soon to a port near you

News out of Freeport, Bahamas indicates that the fire damaged Yantian Express will indeed to be coming to Halifax, likely before the the end of May, to discharge the remaining containers.
Subject to technical approval of the classification society and the refitting of hatch covers, and final berthing arrangement in Halifax, the ship is expected to sail from Freeport around mid-May. 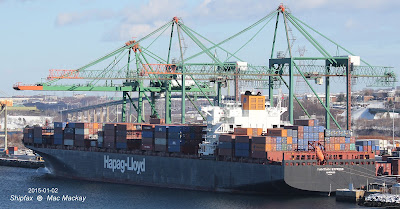 I won't recap all that has gone before, except to say that after the January fire broke out and the ship arrived in Freeport, the damaged containers have been removed . Insurance reps identified 202 containers a total loss and another 460 requiring inspection. Presumably that has been done now, and all "distressed" boxes removed.

However there remains the logistical issue of unloading thousands of others, and what to do with them then. Apparently up to one third of cargo owners have not contributed to the general average fund, meaning that they have written off their boxes and will no longer want delivery.  I would assume that the insurers are then free to sell the contents to defray settlement costs.