The locally based Canadian Maritime Engineering Company (CME) is on a growth curve. Its latest acquisition will increase its footprints in eastern Canada.

CME's parent company Russell Industries Corp is involved in project and maintenance work related to power generation and heavy industry. CME serves the marine sector with a variety of services related to repair and maintenance. Over time CME has acquired various small shipyards that allowed them to to do marine repair and various kinds of industrial fabrication in their own facilities.They are also builders of small craft, usually work boats, and are dealers in marine engines.

Their current list of yards includes CME Halifax Harbour Shipyard in Sambro Head, formerly Brenton Grey's Boatyard. It has a 150 ton and a 300 ton slip. They also operate the North Sydney Marine Railway with a 2500 ton capacity slip. These are complimented with a fabrication facility in Barrington Passage, and several other divisions including coatings, and engine sales and servicing for major manufacturers. They also do alongside repairs at locations where ships are berthed.

Their west coast operations include Port Alberni with two 150 ton and one 250 tons slip and Nanaimo with an 80 ton and 150 ton slip. They also do work in Esquimalt using the publicly owned drydock. There is a further division based in Niagara-on-the-Lakes, ON.

Their latest acquisition is still pending. CME is the preferred bidder for the Clarenville Shipyard in Newfoundland, owned by the Burry Group, that went bankrupt in 2018. The yard became insolvent, owing nearly $5 million when several projects went wrong for them and continued financial backing was no longer available.

CME's bid, apparently the highest of several, is less than 75% of the assessed value of the yard and will have to approved by the courts before it becomes final. When it was operating the yard carried out repairs to Newfoundland government ferries and other local craft, and was a major employer in the area.

CME received some unwelcome publicity last winter when its Sambro yard was the target of vandalism. Wires securing CCGC Corporal McLaren MMV were cut during the night and the ship slid down the ways, fell on its side and nearly capsized. Although it has since been recovered repairs have not been completed, and other work planned for the yard is backing up. The two retired Halifax-Dartmouth ferries are waiting in Sambro and would be drydocked before sailing to Toronto. 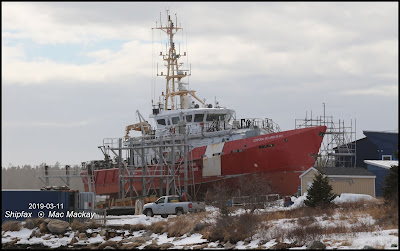 CCGC Corporal McLaren M.M.V. back up the slipway, will require extensive repair to water and other damage before it can return to service.

Burry's yard made a $500,000 write down on a failed bid to acquire the Marystown Shipyard They lost a further $1.3 mn when the owners of the ex ferry Sir Robert Bond refused to pay a $1.3mn bill for conversion work. (The ship was to be used for transporting peat moss, but the work was suspended, the ship was removed from the shipyard and was eventually sold for scrap - see previous post.) The last straw was an incident involving the Newfoundland government ferry Gallipoli that "shifted in the cradle", damaging both ship and cradle. The government cancelled the refit contract and removed the ship.

Another Burry Group company, Norcon Marine Services supported the shipyard fiancially for a time, but is listed among the creditors and are owed $1.6mn. Norcon owns and /or operates ferries for the Province of Newfoundland and Labrador and for a fish farming company and were also a major customer of the shipyard.

CME has a small presence in Newfoundland, but should this acquisition go through they will become a significant player there.