The tall ship Caledonia, once an aspiring part of Halifax's waterfront scene is on the move again after several years languishing in Toronto.

On Saturday morning May 4 it left in tow of the tugs Salvage Monarch and Radium Yellowknife for the St.Lawrence Seaway. Once clear of the locks it will have to be handed over to some more capable tug for the trip to Boston. 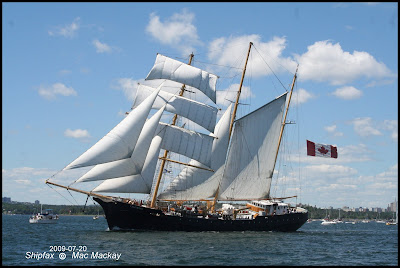 In its glory at Tall Ships 2009 in Halifax, Caledonia under sail.

The ship has a long and varied history, including various visits to Halifax.

Built in 1947 by the famed Cook, Welton and Gemmell in Beverly, England it was a steam powered trawler named Akurey working for a variety of Icelandic owners and the Icelandic government. In 1967 new Norwegian owners renamed it Akeroy, a name it carried until 1968 when it became Petrel, working as a seismic vessel. It was also converted to diesel power with a 1500 bhp KHD engine. 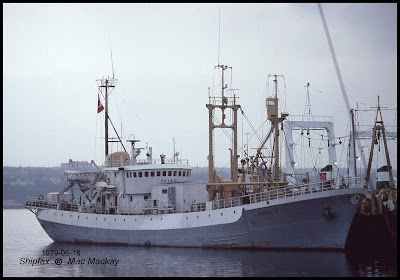 Techno-Navigation Ltée of Quebec City acquired the ship in 1976, renaming it Petrel V and converting it for research in 1977.   It was then hired out to various organizations, including Dalhousie University in Halifax. Based in Lunenburg it engaged in fisheries research in co-operation with several other universities and fishing companies. 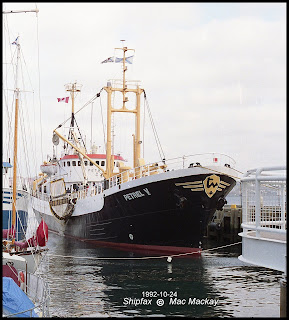 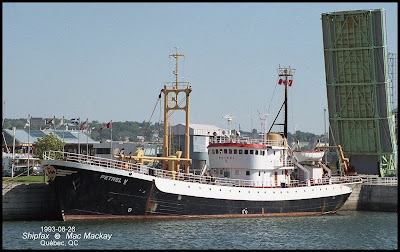 In 2000 Cape Harrison Marine of Newfoundland acquired the ship, renamed it Cape Harrison, and it continued doing research work, some for the offshore oil industry. They modified the ship in several small ways, such as removing the cargo booms and installing a starboard side gantry, removing the large lifeboats and clearing off the after deck. 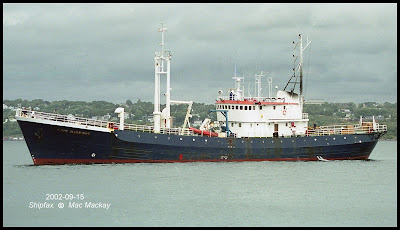 In 2002 Canadian Sailing Expeditions of Halifax bought the ship, renamed it Caledonia, and began its conversion to a sailing vessel. In December of that year it was moved to Hamilton, ON. A major fire while at Heddle Marine's shipyard delayed completion. The ship was back in Halifax in September 2003 for a ceremonial arrival under sail the next day, although the below deck accommodation work was incomplete. Surviving hurricane damage, and another fire, work continued off and on back in Hamilton, returning to Halifax in 2007, with the work finally complete in 2008.

Unfortunately costs increased and what was estimated at $8.5mn ended up at $9.6mn and the owners were forced into creditor protection and eventual bankruptcy. Caterpillar Financial Services ended up as owners, with the previous owners as operators, but they were unable to sell the ship or mount a regular cruising schedule.


In November 2012 the ship returned to the Great Lakes and although it may have operated for a time, it was laid up in Toronto. Recently the price was reduced to $1,499,000.

In March a Boston based restaurateur, Navy Yard Hospitality, negotiated purchase as part of a redevelopment plan for the old Boston Navy Yard in Charleston. So far they have a temporary license to moor the ship in the Navy Yard as a "raw bar" from May to October. From press reports it seems that the ship will not be used for passenger work even though it is fully equipped and qualified under SOLAS regs to sail with 70 passengers and 21 crew. A perhaps undignified fate for an interesting vessel.

Sailing ships are notoriously difficult to tow - bow sprits tend to get in the way, among other things - and neophyte owners do not add value to the exercise. A riding crew would seem to be essential, certainly in confined waters. I will be following the tow as much as possible, remotely. 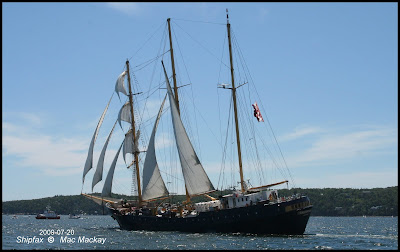 This is probably not the last we will hear of Caledonia.