Pictor J - new to Eimskip and an exercise

It was my intention to to get a photo of the latest addition to Eimskip's Green Line service from a good angle. However the onset of rain deterred me, and I had to settle for another "going away" view. Maybe next time. 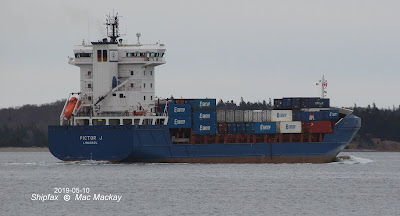 Pictor J joined the rotation in April, replacing Lomur (which was also in port today for SPMI's St-Pierre et Miquelon service) but did not call in Halifax on its first trip.

The gearless 10,965 gt, 12,640 dwt ship with a 965 TEU (including 300 reefers) capacity dates from 2009 when it was built by Naval Gijon S.A. as one of series built to the Sener 950 design. Featuring a full width wheelhouse, sheltered forecastle peak it is classified as Ice Class III .

The ship is owned through the Jüngerhans Group, a German company of long standing, but is registered in Limassol, Cyprus. See their interesting web site: https://www.juengerhans.de/en

As the ship was getting away from pier 42, Halterm, a Royal Canadian Air Force CH-149 Cormorant search and rescue helicopter was hovering at very low altitude over Dominion Diving's Halmar just south of Ives Knoll. Four Cormorant helos and a Hercules are tasked to SAR work and operated by 413 Transport and Rescue Squadron based in Greenwood, NS, covering a gigantic area of 1.8mn square miles, stretching from Nova Scotia, to Quebec City, to Baffin Island and out so sea. 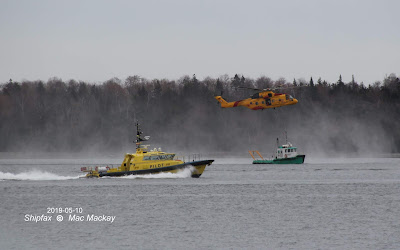 This was some form of exercise presumably, not a real life emergency, as the pilot boat Nova Pilot hastened past to work the outbound Pictor J.

Both Scotia Pilot and Nova Pilot are back in full service after several months, and APA No.18 has returned to Saint John, NB.