Traffic in the harbour has been nearly as per usual in the past couple of days, with a few unusual twists.

Usual
Today Lomur arrived from St-Pierre, on its pinch-hitter role for SPMI while Nolhan Ava is in refit in Freeport, Bahamas. 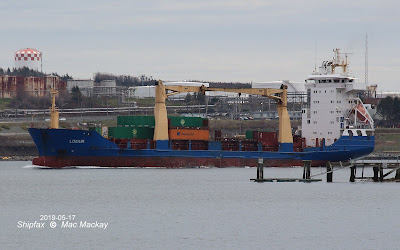 According to press reports, Macquarie, the former operators of Halterm (they sold it to PSA last week) are still seeking in excess of $1.2 million in damages from the March 23, 2017 alision of Nolhan Ava and one of Halterm's old unserviceable cranes. Nolhanava (as it was then) was approaching the berth at pier 36-37 when its bridge wing struck Crane #2. The crane was shifted out of position, striking a concrete barrier which in turn struck Crane #3. Apparently Halterm is claiming that damage to #2 crane was so severe that immediate demolition was necessary. That is a matter for the courts to decide.
Damage to Nolhana Ava was apparent shortly afterwards. 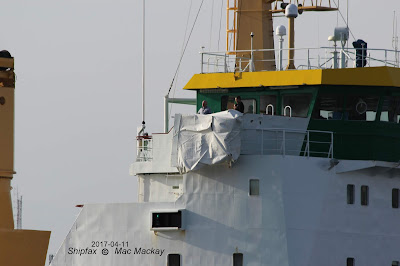 Crumpled bridge wing was tarped for safety until permanent repairs could be made. In order to damage the starboard bridge wing and impacting the crane, the ship had to be backing in towards the berth 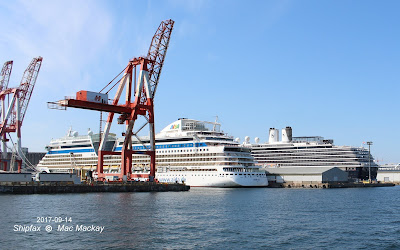 As far as "immediate" goes, it was not until early September that a large crane was set up to begin demolition of the crane. (The crane boom is lying flat on the pier and has not been raised yet.) 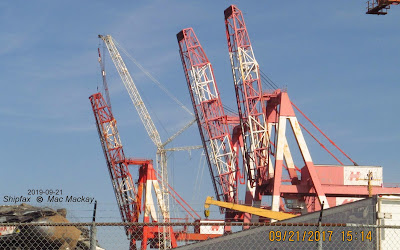 It was past mid-month before demolition actually got under way on crane#2, with demolition of #3 and #1 following.

Usual
Today it was just another in the seemingly endless stream of autocarriers  Eurasian Highway made its call at Autoport. The ship was here before in 2016, but I did not get a photo then.
The ship is still in the old (and boring) K-Line livery of plain grey hull. Newer ships have adopted a more dramatic colour scheme shown here recently. 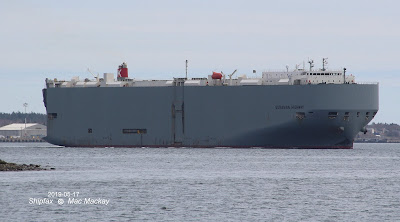 
Not so usual
Not so usual visitors sailed last evening (Thursday) for Boston. The tug Salvage Monarch, towing the tall ship Caledonia had arrived Sunday to get out of high winds in the area. No photos were possible for me, but there are some excellent ones of Shipspotting Canada-East Facebook among other locations.

Caledonia was covered here recently and the tug Salvage Monarch is the subject of a Tugfax post today.

Unusual
Another not so usual visitor is the Brigitte Bardot the latest in a long string of Sea Shepherd Society protest vessels to call in Halifax. Several of these have had lengthy stays here through arrest or other circumstances. 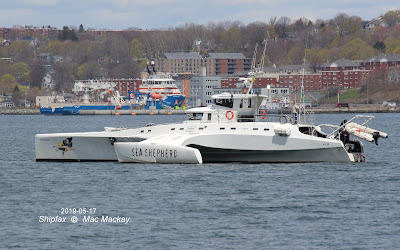 Brigitte Bardot (the boat) features two outriggers for stability, and a narrow main hull permitting speeds up to 27 knots (50 mph) using diesel fuel. Prior to Sea Shepherd ownership it set a (since broken) speed record for round the world sailing.


This one appears unlikely to have an extended stay.  It is named the now 80 something French film star, a long time animal rights advocate, whose fame drew considerable attention to the east coast seal hunt when it was still a major commercial enterprise. She ventured out on the ice to see the seal pups for herself in 1977, bringing down the wrath of Newfoundland sealers.

Brigitte Bardot has been based in Australia since it was acquired by Sea Shepherd in 2010.