Fire not the only hazard

Today's arrival in Halifax, the Yantian Express, is just one of several ships that have suffered fires at sea recently. Ships of Grimaldi Lines (parent company of ACL) have suffered two fires in past months, one of which resulted in the total loss of the ship when it sank in the Bay of Biscay. In the other, two fires broke out in the same ship on different decks within an hour or so. In that case the crew was able to extinguish both  fires and minimize damage.
The chairman of Grimaldi Group is calling for stronger regulation to control the contents of  containers, and the condition of automobiles shipped by sea.

Recent fires have been traced to containers that were improperly labelled or stowed, but there are other causes too. Another regular caller in Halifax suffered a serious fire in the engine room. November 1, 2016 while 90 miles ESE of Las Palmas, a major fire erupted in the engine room of Maersk Patras knocking out the main engine and generators. Fortunately the fire was suppressed by the on board CO2 system and no lives were lost. The ship eventually returned to service and is on the Canada Atlantic Express operated by Maersk and CMA CGM, calling in Montreal and Halifax.

Maersk Patras with its accommodation ladder raised.
It will be lowered when it is time to disembark the pilot. No pilot ladder will be used

On Sunday May 19 while Maersk Patras was inbound on the St.Lawrence River to embark a pilot at Escoumins, QC, one of the crew members fell overboard. Despite an immediate response with the ship's own rescue boat and the pilot boat and a large SAR operation with Coast Guard vessels and aircraft, the victim was not recovered from the 6 degree C waters. Reports indicate that it was the ship's second officer that was lost, and that he was not wearing a PFD or life line.

Particularly with high sided craft such as container ships and tankers in ballast, ships use what is called a "combination ladder", that is  an accommodation ladder in combination with a pilot ladder. 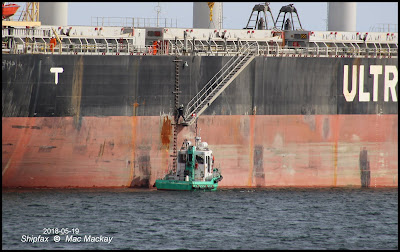 Making the awkward transition between pilot (rope) ladder and accommodation ladder is difficult enough in calm harbour conditions at anchor let alone with the ship underway in any kind of seas.

Some container ships and autocarriers have side port doors low on the hull to eliminate the need for a combination ladder. That is no guarantee of safety however. In a recent incident a sea broke into the opening as two crew members were opening the inner door. One man was swept away and the other injured.

Maersk Patras is due in Halifax next weekend on its way back to Europe. As with any ship that calls in certain ports regularly, crew members have friends or family in those communities, and I am sure there will be many in Montreal and Halifax who will be grieving the loss of this officer.  I extend my sympathy to those effected.