The much anticipated arrival of the Yantian Express this morning was obscured to a degree by rain. As the ship worked its way up the harbour, the rain intensified, but it was still possible to see some of the impact of the fire that destroyed 202 containers and damaged as many as 460 others.

The ship was en route to Halifax January 3 when the fire broke out northeast of Bermuda. Weather conditions were severe and firefighting was difficult for the small crew. Help arrived in the form of a nearby tug Smit Nicobar and over the next several days it was assisted by the Maersk Mobiliser out of St.John's and Horizon Star from Halifax and relived by the Sovereign, sent out from Rotterdam. By the time the ship finally arrived off Freeport, Bahamas January 30 the fire was subdued, although there was still concern about hot spots. 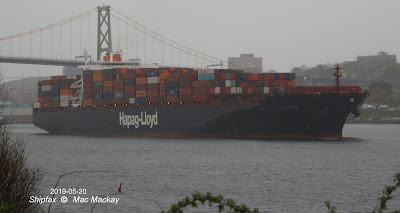 The laborious process of removing damaged containers and inspecting others, then cleanup and making repairs to the ship's hatch covers took until early this month. The ship was finally cleared to sail May 15. 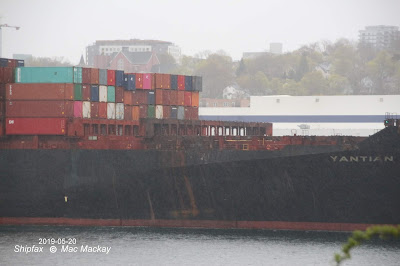 On arrival today two other ships were occupying the berths at Fairview Cove and they had priority, so for the present Yantian Express is anchored in Bedford Basin awaiting its turn. 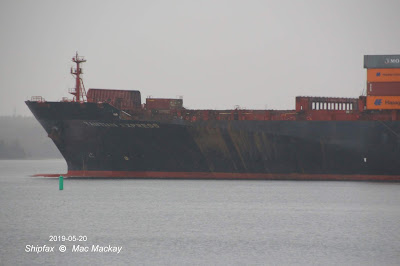 The ship is carrying no containers in the forward holds where the fire took place, and thus is trimmed down slightly by the stern, with the top of the bulbous bow just visible above the waterline. Containers originally destined for Halifax will be unloaded here, but it is unclear how the other containers will be dealt with.

Atlantic Bear on the flank and Atlantic Fir on the stern escort the ship to the anchorages.
.