Roll Out the Bow

Halifax Shipyard marked more milestones today when they rolled out the bow megablock for AOPS2, the second arctic patrol vessel, and officially started construction of AOPS4. 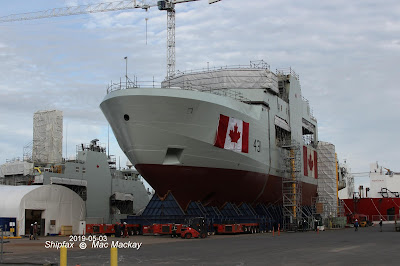 The bow megablock is coaxed into position late this afternoon for AOPS2, while AOPS1 lies alongside at the fitting out berth.


AOPS2, the future HMCS Margaret Brooke was laid down May 29, 2017 and the first two megablocks were rolled out September 21 and 22, 2018. Today's megablock (actually Megablock #1 in the shipyard's plan) completes the major assembly phase.  It took much longer to bring this bow section out than it did on the first ship of the series AOPS1 (future HMCS Harry DeWolf) - 7 1/2 months versus 5 months.

AOPS1 was launched September 15, 2018 and it is alongside the shipyard fitting out. It will be delivered this summer. Based on the previous timeline it may be up to 9 months before AOPS2 is actually launched.

The Defence Minister was in town today to witness the start of construction of AOPS4, the future HMCS William Hall. He agreed that there have been production delays because a sixth ship was added to the contract. How that explains the delays he did not elaborate.

He is also reported to have said he wasn't concerned about delays if it meant quality standards are upheld. This may be a veiled reference to problems that have been rumoured, but never acknowledged. Certainly Irving Shipbuilding and Sesapan started close to ground zero in shipbuilding, and all sorts of issues would have been anticipated. Much was made of welding quality in Seaspan's ships, and some had to be re-done.

The sixth AOPS ship is expected to be completed in 2024. The minster apparently did refer to the gap between that delivery and the start of the frigate replacement program, when the shipyard will not be able to sustain full employment for some period of time. The sixth vessel was supposed to reduce that gap, but it is by no means clear on how the government plans to "mitigate" it.