Fog and rain eventually hampered visibility in the harbour late in the afternoon, just as the autocarrier Pleiades Spirit was sailing. I was hoping to catch this ship since it does not belong to one of the well known lines. Built in 2008 by Toyohashi Shipbuilding, it is a 60,330 gt, 17,424 dwt vessel with a capacity in the range of 5232 to 6303 CEU. It is managed by World Wide Marine Co Ltd of Japan as one of 17 autocarriers in its 128 ship fleet. Interestingly the ship arrived from New York and is sailing for Southampton - the reverse of the usual autocarrier route.
Originally to be operated by Nissan, it has been operated by World Wide since 2009. It seems to be on charter to MOL but this can't be confirmed independently.

At Fairview Cove, Yantian Express (photo'd early yesterday) was due to slide back along to the west end of the pier to resume unloading. There are still a lot of the 3200 container still on the ship. 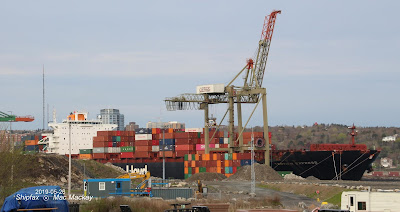 Shippers are being advised that when their boxes are released, upon posting of security, they will be sent to destination, by rail, truck or ship, without inspection, since there is no room to do that in Halifax.

Another "reverse" arrival was Elka Nikolas tying up at Irving Woodside last night. The ship came from Saint John and has a small amount of cargo for Halifax. 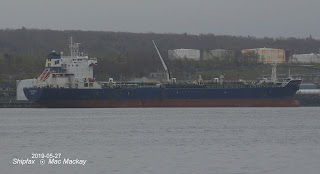 Built by Brodosplit in Croatia in 2001, it is a 27,542 gt, 44, 787 dwt ship of the MidRange type. It is part of the European Product Carriers Ltd fleet, based in Athens. Shortly after delivery, the ship was renamed Fusus but reverted to its original and current name in 2009.
Sister ship Elka Eleftheria, built the same year at the same yard, was here May 13, but came from Ijmuiden / Amsterdam then sailed to Saint John.
The ship is due to sail early tomorrow morning and its place will be taken within an hour by Irving's East Coast.

There was no call by Maersk /CMA CGM's Maersk Patras over the weekend. It was scheduled to call May 25, but perhaps the fatal accident last week resulted in a delay. The second officer was lost overboard off the Escoumins pilot station May 19 and his body has not been recovered.
There were protests for safer working conditions when the ship docked in Montreal. Instead of sailing for Halifax, the ship headed directly for Bremerhaven, the next scheduled stop.