The much anticipated Coast Guard renewal process was announced today by the Prime Minister at a photo op in Vancouver. With a federal election coming in the fall everything is now timed to maximize political benefit.  This announcement could have (should have) been made years ago, but at least the wheels are in motion. 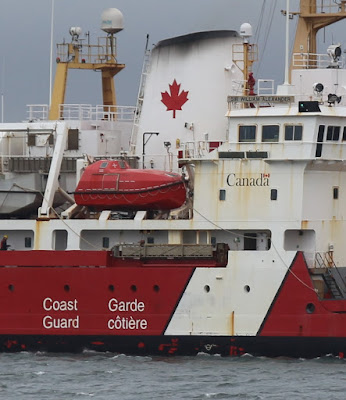 The essence of the announcement as I understand it is as follows:

Vancouver Shipyard / Seaspan:
"Another Yard"
As part of the announcement the PM said that the CCG will also get a new class of inshore, shallow draft, multi-mission vessels that can do inshore science.
No yard has been selected, but commentators expect that Davie will get the work.
I am not so sure. Details are skimpy on these vessels as of now, but in view of several past decisions, "in-shore" means undersized. Certainly well below the capabilities of Davie, and well within the capabilities of several smaller yards, mainly in Quebec, such as Meridian in Matane and Forillon in Gaspé, perhaps acting in consortium.
Davie has just been handed the Holiday Island and Madeleine replacements, which will be largish ships of medium to high complexity, particulary if they go with eco-hydrid types.

Also
Since the vessels announced today will be some time (5 to 15 years) to complete, the CG has been allotted $2 bn to refit and life extend ships. Some of those will be limping to the finish line, but it will provide work for a variety of yards outside the National Shipbuilding Strategy program.

NSS
The National Shipbuilding Strategy already in place has committed to the following:

Still Missing:
One more interim supply ship for the RCN.  Maybe another sop to Quebec if the election polls are looking bad?