Another gloomy day greeted cruise ship passengers today, although one benefit of their mid-morning arrival meant that showers had largely ended. Sales of hoodies were expected to boom as cool temperatures remained.

Adventure of the Seas features a plain white livery with barely visible blue stripes running almost the entire length of the ship. So far Royal Caribbean International has not succumbed to the super graphic / alias graffiti of other lines, although on this ship a huge water slide mounted high over the stern does detract from its clean lines. The yellow lifeboats and tenders are change from the usual safety orange.
Built in 2001 by Kvaerner-Masa, Turku, Finland, the 137,246 gt ship has a passenger capacity of 3,114 and crew size of 1,180 according to most sources.

As a contrast in appearance the next arrival lacked some of the grace of the previous one. 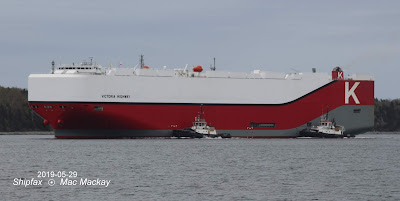 Carrying more than enough cars  to outfit every passenger and crew member of the cruise ship, Victoria Highway arrived an hour later. The 73,528 gt, 21,114 dwt ship was built in 2018 by Tadotsu Shipyard Co in Kagawa, Japan. It has a capacity of 7,450 CEU.
The ship features the new paint scheme adopted by K-Line for its autocarriers and looked quite striking as the tugs Atlantic Bear and Atlantic Fir came alongside to nudge the ship towards Autoport.