Although it is the Victoria Day holiday weekend on land, it does not appear that Monday will be a holiday at sea. The three herring seiners that have been in port since Friday sailed this afternoon for the fishing grounds.

Morning Star is the newest and smallest of the three, built in 1991 by Caraquet Marine in New Brunswick. First owners, from Wilson's Beach, Grand Manan Island, registered the vessel in St.Andrews, NB. Ownership has since changed to Scotia Pelagic Inc of  Yarmouth, NS, but the port of registry remains unchanged. 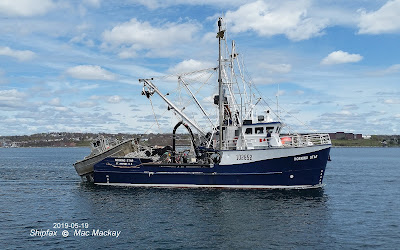 Quick snap from my phone caught Morning Star easing away from its dock at Bishop's Landing early this afternoon.

Once Irving Oil's East Coast completes its work at Woodside early tomorrow morning. Its place will be taken later in the day by DL Rose which is currently unloading at Imperial Oil's #3 dock. (see yesterday's post).

East Coast is due to sail in the wee hours.

Since DL Rose will only be at Irving Oil for a few hours, I expect it will be there to take on bunkers rather than discharge or load any cargo.


The harbour looks to be quite busy tomorrow with three ships scheduled for Fairview Cove. Regular callers Atlantic Star and Budapest Bridge will dock on arrival, but the third will go to anchor.

That ship is the much anticipated Yantian Express, originally due the first week of January. Delayed by fire and the subsequent cleanup and repair in Freeport, Bahamas, the ship will now arrive with the surviving cargo destined for Halifax. There is no clear information from the shipping line or insurer what will happen then. I expect only the Halifax cargo will be unloaded here and the ship will proceed to New York for cargo that was destined there and on to its other east coast ports until all cargo is discharged.

It is also unclear what condition the ship is in, and whether it will take on new cargo or will only unload  and eventually proceed to a shipyard for refit. Reports indicate that the hatch covers that were damaged by the fire have been repaired sufficiently for the ship to sail safely, but there must be other damage that will require substantial repair work.