How Windy Was It

Very high winds earlier in the week forced many ships to remain in port and even dredging off Halterm was suspended for for Tuesday and Wednesday. Conditions improved by Friday and some ships decided to sail, others opted to wait until today, but then winds picked up again. However but it was business as usual.

The cruise ship Fram must have changed its itinerary a couple of times after arriving 12 hours late on Wednesday. It was supposed to sail later then same day, then yesterday, but finally got underway today.

Tucked in out of the wind at pier 24, the ship had an extended stay in Halifax.

Another departure after a short stay in port was the schooner Avontuur.  It arrived in Halifax Tuesday (see previous post) May 14 and off loaded a part cargo of fair trade coffee beans. 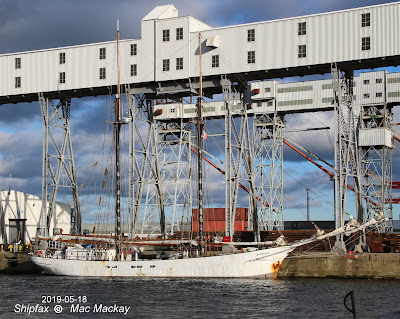 Getting away early this evening, the vessel made a maneuver that is rarely seen today. Berthed bow in at pier 25, the ship turned in camber using a spring line from the starboard quarter. 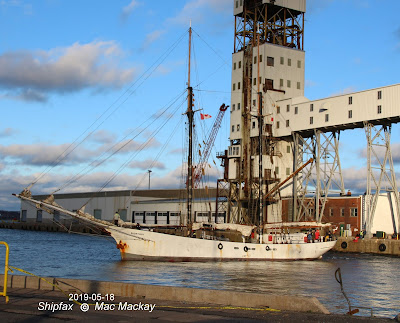 (The spring line ran to a bollard on shore, that appears just off the ship's stern in this photo)

Once turned about 180 degrees, the line was let go and the ship moved out quite smartly under power, destination Horta, Azores. 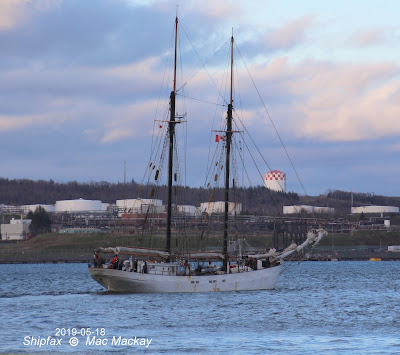 Arrivals seem unhindered by today's weather, but precautions were taken.

Glen Canyon Bridge took its stern escort tug Spitfire III well before reaching the lower harbour and had the tug Atlantic Oak on its port side until rounding George's Island. It then stood round to the starboard for the bridge passages and the Narrows. A fair amount of spray was in evidence.

Geln Canyon Bridge, still wearing K-Line colours, is now part of ONE ( Ocean Network Express) the amalgam of the three primary Japanese container lines. Built by Hyundai Heavy Industries in Ulsan in 2006 it is a 68,750 gt, 71,291 dwt ship of 5624 TEU (including 600 reefer) capacity.

Happily in shelter for the weekend were three herring seiners. The familiar Sealife II, Morning Star and Lady Melissa are the usual scouts sent out to find the spring migratory herring run. 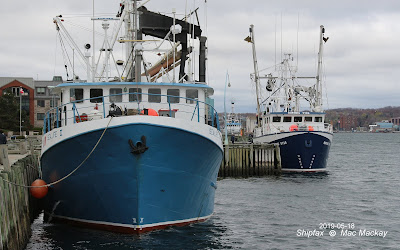 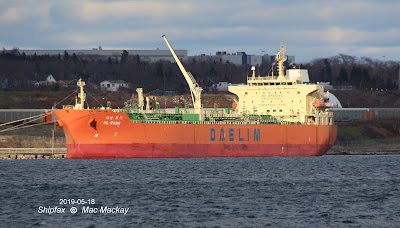 Although the vast majority of MidRange tankers were built in Korea, we don't often see them owned and flagged from that country. DL Rose is the rare exception. Built by SPP Shipbuilding Co in Tongyeong in 2007  it is owned by the Daelim Corporation. Management is by Wilhelmsen SM's Indonesia operation. It is of typical MR size, 39,990 gt, 49,997 dwt. It also exhibits its name in Korean lettering on the bow, just above the name in English. Its last port was Antwerp.

Arriving early this morning at Autoport was a new to me autocarrier. Morning Celine belongs to the Eukor fleet and was built in 2009 by Imabari Zosen in Marugame, Japan. At noon it moved over to pier 31 to offload some  other RoRo cargo.
] 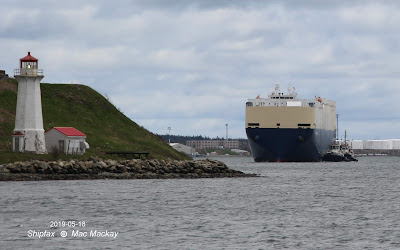 Tugs Atlantic Fir and Atlantic Bear have accompanied the ship from Autoport and are preparing to turn it to back in to pier 31. They are in the lee of the north wind.

After unloading some heavy cargo at pier 31, using the ship's 100 tonne capacity stern ramp, the ship sailed early this evening.

With the tourist season now in full swing the tour boats are back in business, including Kawartha Spirit returning from a Northwest Arm tour butting right into the headwind. 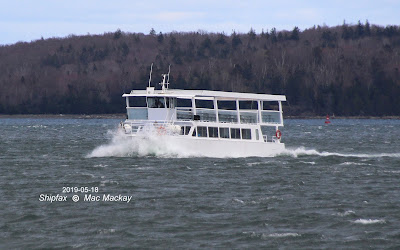 What ever happened to the plan to rename the boat something more appropriate to Halifax?