1. Alida Gorthon steams into Halifax after conversion to a side loader. Scaffolding around the foremast indicates some work is being carried out by the crew. The enclosed crows nest was often a feature of ships built for navigating in ice. 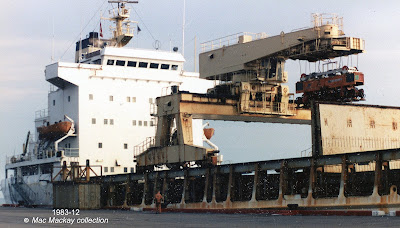 2. Before conversion, the ship carried two of these 30 tonne travelling cranes. They had special suction apparatus to lift rolls of paper and deposit them directly into the hold. This method of offered no weather protection. As for unloading it meant "last on-first off" which was not always convenient.

It did not take long for another member of the Gorthon Lines trio to bite the dust. I learned today that Alida Gorthon has also been sold to Indian breakers.
I featured sister Margit Gorthon on April 1, and sister Ingrid in previous posts.
Alida Gorthon was also built in 1977 as a bulk carrier and converted to side loading in 1990. The ship had a similar history to its sisters, and had numerous brushes with ice over the years.
In March 2005 it put in to Verreault Shipyard in Méchins, QC with rudder stock damage incurred in ice in the Gulf.
As with its sisters it was sold in 2006 to Bahrain Bank and operated by Lemissoler of Cyprus on a charter back to Rederi AB Transatlantic. On completion of the charter it continued in the paper trades, by which time it had been repainted red. It was never renamed however and represents the last ship with a Gorthon name still sailing.
.
Posted by Mac at 10:04 AM