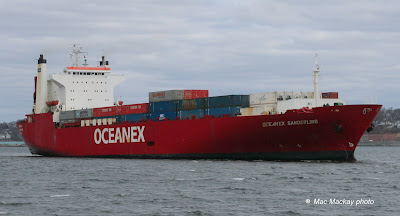 In its regular move from Autoport to Halterm at noon time Oceanex Sanderling made a big swing north around George's Island and then west of the island to tie up at pier 41. It was very windy, which may explain why (and it had a tug alongside the whole way).

On arrival the ship usually goes to Autoport first, then to Halterm, but normally takes a more direct route, depriving me of a photo op!
Although the ship has been a regular weekly (and twice weekly when possible) caller since 1988, I still like to get a picture now and again.