Another fine ship is on the way to the breakers. The former Margit Gorthon is due in Alang, India on April 5, where it will quickly be reduced to scrap metal.

1. As built Margit Gorthon was a geared bulker. It is shown arriving Halifax in tow of Orion Expeditor with its rudder jammed at 5 degrees off centre line after meeting ice in the Cape Ray area. It was repaired and sailed March 22, 1989 for Baie-Comeau, QC. 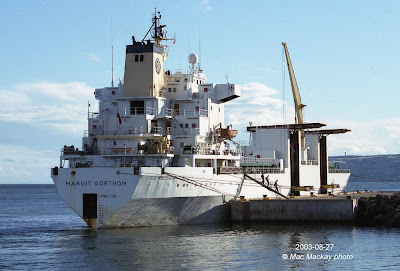 2. Rebuilt in 1990 as a side loader, it had two loading doors (here in the open position) and internal elevators. There was a 15 tonne crane mounted midships between the doors. Work has just been completed for the day at Pointe-au-Pic, QC and some crew members are going ashore.

3. From the port side the elevator and ventilation housings are visible. The ship is coming to anchor after leaving Halifax Shipyard for propulsion trials. It spent nearly a month in drydock to repair severe rudder, prop and bottom damage. Workers also repainted the ship's hull.

A sistership of Ingrid Gorthon, mentioned here on February 13 and once part of the Gorthon Rederi-see January 24, the ship was a familiar sight in Halifax for many years both for bunkers and for repairs. As a year round caller to eastern Canadian ports, it had many brushes with ice, and both of the Halifax visits pictured above were caused by ice damage.

Built in 1977 by Korea Shipbuilding as a 10,538 gross ton/14,928 deadweight tonne bulk carrier, it carried two 30 tonne travelling cranes for handling forest products, usually newsprint in rolls. It had four rolling hatches over four holds. As standards for handling paper changed, more protection was needed, both during loading and in transport, and the ship was extensively rebuilt by Blohm & Voss, Hamburg in 1990. It emerged as a 12,750 gross ton/ 14,240 deadweight tonne side loader, with a single hold.

Cargo was forklifted to the ship where is was moved by rollers to internal elevators and stowed in a humidity controlled environment. Two large side doors provided access for loading and for the reverse procedure for unloading.

As previously recounted, when Gorthon became Rederi A/B Transatlantic and new ships came in , the older Gorthon ships were sold to Bahrain Bank for operaiton by the Cyprus based Lemissoler Group. In the case of Margit Gorthon, this happened in March 2006. The ship was chartered back for four years. On completion of the charter the ship was renamed Forest Trader and continued in the paper trade until recently when it was sold to the shipbreakers.