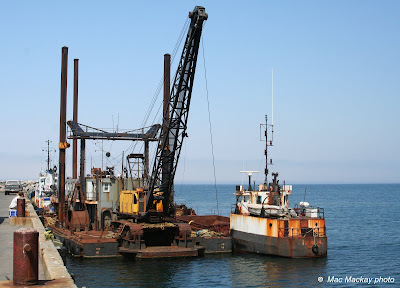 1. On Tuesday April 17 the dredge Rosaire and hopper boat I.V.No.14 are lying at Meteghan, NS, with the Groupe Océan tug André H. (in the background) preparing to tow then to Quebec.

Another of those monumental shakeups that seem to follow the Canadian dredging industry has passed beneath the radar of the English language press, since it appears (on the surface) to be a Quebec story - but don't be so sure.
In 1956 Verreault Navigation of Les Méchins, QC entered the dredging business. A local entrepreneur and ship's captain Borromée Verreault built his own little dredging fleet with unique self-propelled hopper boats. As the lucrative business base, it was able to expand its shipyard into a large enterprise. When the founder died his wife, and then two daughters took over and ran the company.
In 2000 the Verreault daughters decided to split the enterprise, with Denise Verreault keeping the shipyard selling the dredging business to her sister Claudette. Among the contracts that went with it was the lucrative North Traverse maintenance dredging. A yearly channel clearing project that used the trailing suction hopper dredge Port Méchins, originally J.P.Porter's Lockeport, which had been based in Halifax. Claudette Verreault discovered that the fleet was in poor condition and that Port Méchins would not meet Transport Canada standards. Verreault had also gobbled up a lot of old DPW plant, but it had not been used much and was also in bad shape. As a result there were lawsuits between the two family members and and the newly formed Dragage Verreault took on a large debt to keep the company going. One frequent contract for Verreault was Saint John, NB harbour dredging, but this was eventually won by Harbour Development (through Atlantic Towing Ltd, a J.D.Irving company.) Verreault also lost the Traverse work because Port Méchins could not be upgraded. It was sent to Veracruz, Mexico where it may have found some work.
Meanwhile Groupe Océan of Quebec City, an aggressive marine construction and tug operator was expanding, and was extremely well capitalized. In 2004 it acquired Dragage St-Maurice and never looked back. With its own shipyard, and ability to built its own modern dredging plant and adapt existing equipment for dredging use, it became a powerful force. It gradually wrested away the majority of the St.Lawrence work from Verreault, leaving the company with very little work after about 2009.
In 2011 Océan won the North Traverse dredging contract and now have their own dredge under construction at their own shipyard. It may be in service this year.
In December 2011 Verreault's creditors had enough and forced the company into bankruptcy. On March 29, 2012 its entire fleet was put up for auction - and in a bit of a coup Groupe Océan acquired the whole lot. Valued by some estimates at up to $15mn, they probably paid a lot less, but whatever they paid, they overnight became the major player in the Canadian dredging business.
As this is written Océan is gathering up the Verreault assets at its Shipyard in Ile-aux-Coudres, QC. This includes a dredge and three self-propelled hopper boats that had been laid up in Meteghan, NS for three years. Two of the boats sailed on their own, but Ocean's tug André H. (ex Point Valiant, ex Foundation Valiant) has the dredge Rosaire (ex J.P.P.No. 530, ex P.W.D. No. 21) and hopper boat I.V.No.14 in tow. They passed Halifax late this afternoon.
There are only a few other players in the dredging business. McNally Construction, which was taken over the US firm Weeks Marine in 2011, seems to be more concentrated on marine construction than dredging, but does maintain a large, if aging plant.
Harbour Development is rather a small player, and has not replaced the dredge Shovelmaster which sank in 2008. It is currently working on dredging at the pier 9C extension in Halifax and still has the contract for Saint John.
I expect that we will see Océan expanding out over a wider region beyond Quebec and continuing to grow.
--
The dredge Rosaire was built by the Saint John DD Co in 1952 for the Department of Public Works. It was later acquired by the now defunct J.P.Porter Co. That company was brought down by the 1970s price fixing scandal and it was acquired by Verreault. Fitted with a 20 ton American crane , it has accommodation for 12 and is loaded with equipment.
I.V.No.14 is one of five self-propelled, self dumping spoil hopper boats converted from newsprint carriers. Originally built in the 1930s, they were rebuilt 1969-72 and are unique in the Canadian dredging business. All other operators use tugs and barges.
There are four other barge type dredges in the former Verreault fleet and a couple of scows.
The future of the Port Méchins however is in question.