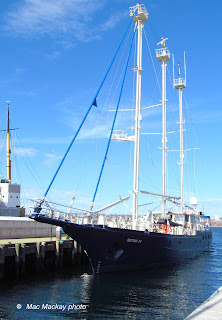 The research/filming vessel Sedna IV arrived in Halifax on Saturday in time for Earth Day. This is most fitting as the schooner is embarking on year two of a three year round the world voyage aimed at documenting biodiversity.
As part of the UN's Biodiversity Decade (2011-2020) Sedna IV is carrying out a voyage entitled "One Thousand Days for the Planet." This is entirely in line with the vessel's recent history, but maybe a bit out of line for its original purpose.
Built in 1957 by Abeking & Rasmussen of Lemwerder, Germany, it was a trawler/drifter named Bielefeld, measuring 297 gross tons. Built of good German steel, it was, perhaps anachronistically, of riveted construction. While German post war shipbuilding had rebounded, some older techniques remained and this boat was built to tried and true standards. It operated in the North Sea until 1969 when it was sent to West Africa. It was found laid up in Tema, Ghana in 1970 and purchased by Danish owners and rebuilt, now measuring 297 gross tons, renamed Starfish. It went back to fishing for a few years when it was purchased for conversion to a sailing vessel in 1990.
It emerged in 1992 as Syscomp I for German owners, under the flag of Antigua & Barbuda. In 2000 they renamed it Saint Kilda (after the remotest outcrop of Scotland) before placing it up for sale.
In 2001 it came to Canada where it was further converted to a floating research lab and film studio for Jean Lemire the noted biologist and cinematographer and based in Cap-aux-Meules (Grindstone) Magdalen Islands. Taking the name of sea goddess Sedna from Inuit legend, it has since ranged far and wide in a variety of projects that have resulted in award winning documentary films. Among the ship's achievements are a one season east to west Northwest Passage in 2002.
After an arctic trip again in 2011 the boat spent the winter in refit at Gaspé and has now embarked on the second stage of its 1,000 day voyage. This year it will visit Asia and Africa. Next year it will see Amazonia, the Mediterranean and the Arctic again.
Fitted out to extremely high standards, it is rigged as a 3 masted schooner with many labour saving devices unthought of in the time of Bluenose.  These include roller reefing of the sails and "hands free" trimming, controlled from the weather protection of a fully enclosed wheelhouse and navigating bridge. 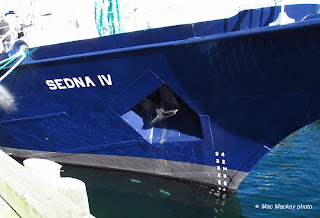 New steel faring at the bow does not conceal the boat's orginal riveted construction.

The ship will sail this evening or tomorrow.
Posted by Mac at 10:01 PM