Nirint Zeelandia - hurry up and wait 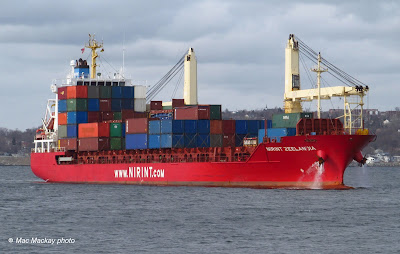 1. Nirint Zeelandia idles off Bishop's Landing waiting for her berth to clear. Her anchor hawse pipes are being lubricated by sea water to keep elminate sparks (and wash dirt and rust from the chain) in case she needs to anchor.

2. Saudi Tabuk finally gets away and makes a run for the horizon.

It is hard to believe that Halifax has a shortage of berthing space, but that is the case, as only one open pier remains for ships with continaers not berthing at either of the container terminals. Specific piers are dedicated to other uses, and there are no other container handling cranes, and thus a lot of activity surrounds pier 31.
Today it was the Saudi Tabuk which arrived at the crack of dawn (in a raging snow storm) and was supposedly finished work at noon, with the Nirint Zeelandia due to tie up as soon as the Saudi had sailed.
In the meantime however there was a tanker and an autocarrier due at other berths and the tugs were quite busy with them, and the pilots were also kept hopping form one ship to the other. It was very windy, and altough the snow melted quickly, most harbour activity was slow.
Cargo work on the Saudi Tabuk was indeed competed at noon however, but it was not until 1630 that tugs and pilots could all be arranged to sail the ship. Then, with pilot aboard, and tugs alongside someone decided that there was more cargo to go on the Saudi! All this took an hour or more and so the Nirint Zeelandia stood by in the harbour ready to anchor again if need be. She could not go to any other pier since all her cargo was for pier 31, the only pier set up to take it.
Finally the Saudi got away about 1800 and the Nirint Zeelandia moved in.
Nirint Zeelandia is one of those odd ships registered in Switzerland. Operated by Enzian Shipmanagement of Zurich, it is on charter to Nirint, a Dutch company, running from Europe to Cuba and transhipping to the Caribbean. See http://www.nirint.ca/
Saudi Tabuk is operated the National Shipping Company of Saudi Arabia -a crown corporation in the true meaning of the term. http://www.nscsa.com/
.
Posted by Mac at 7:17 PM