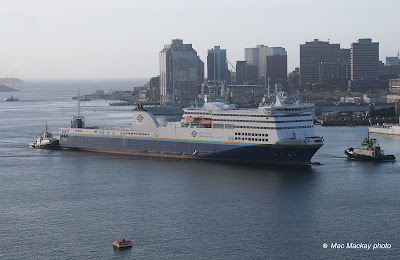 1. Highlanders lines up to pass under the Macdonald bridge with tugs in attendance.

2. Passing HMC Dockyard, with HMCS Iroquois in the background. 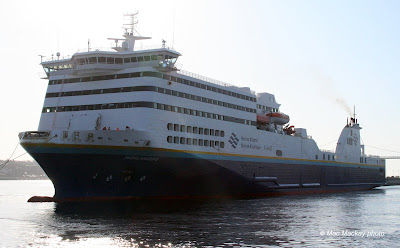 After less than a year in service for Marine Atlantic Inc (MAI), the ferry Highlanders arrived this morning for drydocking at Halifax Shipyard.
Built in 2007 in Russia and completed in Norway as Stena Traveller, for Stena Rederi AB of Sweden, the ship initially ran under the Dutch flag between Hoek van Holland and Killingholme, UK. That service ended in 2009 and in 2010 Marine Atlantic chartered the ship and its sister Stena Trader (renamed Blue Putees) for five years with options to extend.
Over the winter of 2010-2011 the ships were modified at Bremerhaven for service as Seabridge class ships for the North Sydney-Port aux Basques route. Work included shortening the ships by 12 meters, adding a third bow thruster and more accommodation for passengers.
As completed the ships have 96 passenger cabins and 500 recliner chairs.
Highlanders arrived in North Sydney for the first time March 3, 2011 and entered service April 21. Both ships seem to have settled in well to the service and have been generally well received by travellers. With much increased capacity now, Marine Atlantic seems to have resolved the wait times issue.
This morning Highlanders was met by two tugs and backed in to the Novadock at Halifax Shipyard. It is scheduled to return to service on May 2.
.
Posted by Mac at 10:55 AM