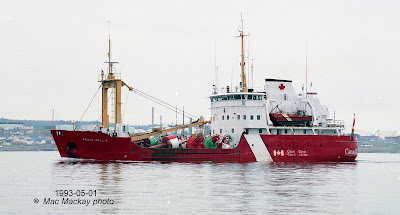 1. CCGS Provo Wallis returns to Halifax with a deck load of buoys.

For the third time this year the vessel 2011-02 ex CCGS Provo Wallis is for sale. The 1969 built buoy tender was put up for bids late last year and in January a bid of $406,000 was received, but fell through. In February another bid of $425,000 was accepted but it now has also fallen through. Yesterday the ship was put up for bids again, with a closing date of April 20, and a minimum bid of $350,000 is required.
I received a fair amount of flack for my comments (and rant) the last time around, so I won't add much now, except that it's too bad that a good ship is allowed to deteriorate until becomes an expensive liability.