1. Passengers crouwd the forward deck as Balmoral arrives, accompanied by the pilot boat APA No.18. 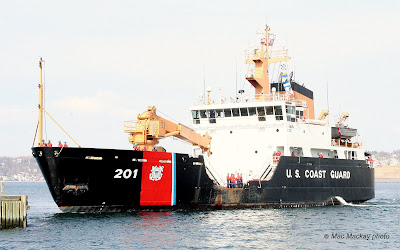 Two more ships in volved in commemorative events at the site of the Titanic sinking put in to Halifax todfay. First to arrive was USCG Juniper. The ship had been tasked to attend the site on April 15 and drop rose petals overboard - one for each victim of the sinking. A USCG C-130 Hercules aircraft was sent to St.John's for a flyover to drop wreaths. However it was called out for a rescue mission to assist a distressed yacht and had to cancel.
Second to arrive was the Fred Olsen cruise ship Balmoral. It's arrival was slow and stately, mainly to avoid a lot of harbour traffic, but it tied up at pier 22 later than scheduled.
It exchanged a single whistle salute with the autocarrier Porgy as the two passed in the Middle Ground area.
Blamoral will stay overnight and all day tomorrow, allowing its passengers to see Halifax and many of the exhibits and places associated with the Titanic. Other events (mostly in good taste) took place in Halifax on Saturday night and Sunday as a tribute to the large loss of life in 1912.
.
Posted by Mac at 9:46 PM