Scotia Prince - end of the line

The ferry that once linked Yarmouth, NS with Portland, ME has been sold to shipbreakers in India. Scotia Prince provided an overnight cruise/ferry experience and competed with the shorter sea route Yarmouth/Bar Harbor, ME provided by the ferry Bluenose and later fast Cats. 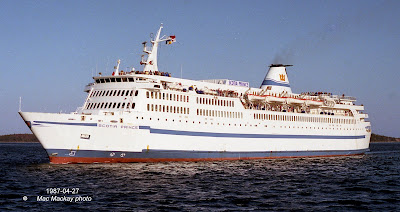 1. Scotia Prince arrives in Halifax in April 1987 to prepare for a trade mission to Boston.

2. In April 1983 Scotia Prince (at left) is tied up at pier 6 Halifax Shipyards for refit. Meanwhile the newly renamed Bluenose is in the Graving Dock fitting out for its first season under that name. On the hull the word "Blue" has not yet been painted on.

Scotia Prince was built as Stena Olympia in 1971 in Brodo, Yugoslavia and could carry 1100 passengers (886 berths). It became Scotia Prince in 1982. It was lengthened in 1986-87 increasing passenger capacity to 178 cabin, 1078 berth and 446 deck passengers.
The ferry was withdrawn at the end of the 2004 season in a dispute with the Port of Portland. Although the Cat ferry tried to cover the route, it was not as successful. In the end the Cat ferry was also removed from service and so today there is no Nova Scotia/ US ferry service at all - a major blow to western Nova Scotia tourism.
The ship sometimes found winter work after the close of the summer tourist season. It ran for a time from Tampa FL to Progreso MX and later Tampa to Yucatan.
In 2005-2006 it provided emergency accommodation in New Orleans then worked in the Mediterranean. In 2011 it was sold to operate between Sri Lanka and India but was diverted on its delivery trip to evacuate 1200 Sri Lankan nationals from Libya.
After about a year in its duty free shopping excursion role between Tuticorin and Colombo the ship was laid up and has now been sold.
It was a similar ship to its competitor Bluenose ex Jutlandica, ex Stena Jutlandica, built in 1973 in Trogir, Yugoslavia. Bluenose was a smaller ship and did not need as many passenger cabins. It operated from 1993 to 1997 and was old for further service, also in the Mediterranean and scrapped in India in December 2010.
Posted by Mac at 8:51 PM