The ownership of the former Verreault Dredging fleet was officially transferred to Le Groupe Océan of Quebec City today. Interestingly there have been no changes of name to the vessels from the Verreault fleet.  The prefix "I.V." has been retained for all the existing scows, hopper boats and dredges.
Three vessels in the fleet have been re-registered:
I.V.No.12 a small 16 gross ton scow built in 1994 as CPSM-08.

The 221 gross tons barge I.V.No.23 the former Rock General No.1., built in 1957 at MIL, Sorel for MIL a rock drill and pile driver. It last saw service about 1995 and has since been used as a temporary pier at Matane.
The dredge Rosaire has also been re-registered.

When Groupe Océan acquired the St-Maurice dredging fleet it was incorporated into Océan's construction division, also without change of name. 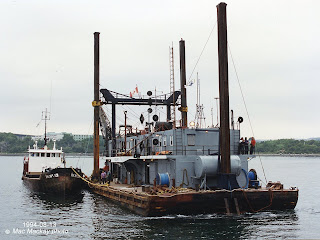 1. The dredge Rosaire arriving in Halifax in 1994 with the hopper boat I.V.No.13 acting as tug.

Footnote: The sole exception to the ownership transfer noted above is the trailing suction hopper dredge Port Mechins, which still registered in the name of Pricewaterhousecoopers, and as far as I am aware is till laid up in Veracruz, Mexico.
Posted by Mac at 8:48 PM