HMCS Preserver sailed this morning-little noticed due to thick fog-one day after CBC News revealed the cost of recent repairs. The ship was turning in the Narrows in November when it alided with the Novadock floating drydock. Damage to the ship included mangled bulwarks forward and twisted frames. Repairs took place within HMC Dockyard, and CBC was not able to say who carried out the work. The total of $490,000 for the repairs must also be brought into question, since there were other associated costs that were not or could not be calculated, including loss of sea time.
The incident cost the commanding officer loss of command.
CBC News also had no luck in determining the costs to repair the Novadock. Damage to the dock included scuff marks, two companionways on the outer face (only one of which has been replaced) several dents and an actual perforation of the shell plating. Immediate repairs were necessary to keep the dock operational, and over the winter crews could be seen from time to time working from floats on repair and repainting. Granted much of the painting would have been done as part of regular maintenance, but there would still be many thous for the  actual repair work.
Upper photos: the immediate aftermath- twisted stairs, scuffed paint indented plates and a puncture. 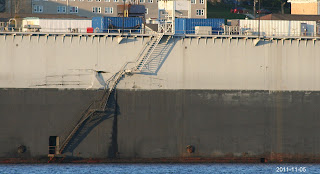 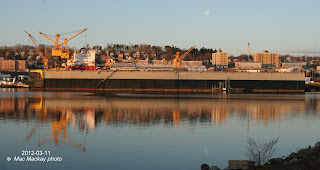 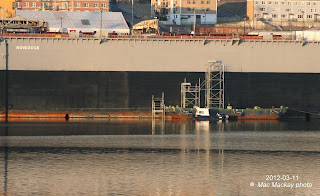 Lower photos: repairs underway in March-hole patched, dock repainted, one stair not replaced. The workboat Harbour Diver alongside a small scow, with staging used for repairs.

It would be surprising to me if the total cost for the whole incident did not reach closer to $ 3/4 million.
Posted by Mac at 7:36 PM