American Feeder Line has packed it in, and will stop its Halifax/Portland/Boston service, due to lack of sufficient cargo.
The feeder line was set up to move Halifax containers to New England in competition with road and rail. Like several other lines that attempted to do this before, they were not able to generate enough traffic to make it pay. A promise of a loan from the Province of Nova Scotia was not enough to deepen the line's pockets (the loan was never used) and AFL states that potential investors have backed out. 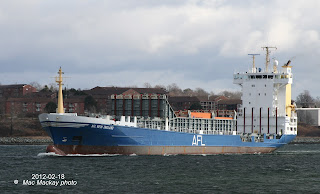 The ship AFL New England remains at anchor in Bedford Basin. Its future is in doubt, and it will likely be returned to its owners- maybe with some debt load.
Posted by Mac at 6:03 PM