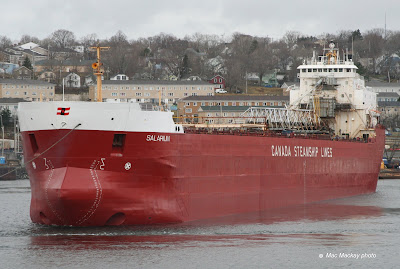 2. At 22 years of age, the ship shows a few signs of hard knocks received over the years.

3. In 1997 the ship was fitted with special gear to ballast the Hibernia gravity base. 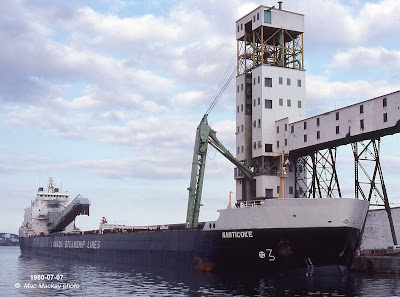 4. In its first year of service, the ship unloads grain at pier 26. Since then the port has installed a hopper, allowing the ship to use its own self-unloading gear. The old grain leg was much slower and is rarely used anymore.

The self-unloading bulk carrier Salarium left the Novadock floating drydock this morning - not under its own power, but with the tugs Atlantic Oak and Atlantic Larch in control. The ship was then berthed at Pier 9A to continue its refit.
Built in 1980 By Collingwood Shipyard, the ship was originally to have been called "Gleneagles" a traditional name for Canada Steamship Lines, but that was changed to Nanticoke in recognition of CSL's customer the Steel Company of Canada (Stelco). They had just built a new steel mill in Nanticoke, ON and the ship was expected to deliver cargoes of coal and iron ore to the mill.
Built as a maximum size for the St.Lawrence Seaway, it was also built to go to sea, with restricted voyages along the Atlantic seaboard.
It started to do these from the start, often arriving in Halifax with grain and loading gypsum for the return trip.
Originally the ship was painted with a black hull, the usual hull colour for CSL self-unloaders, which carried a lot of coal. The black paint was better at concealing the inevitable residues of those cargoes than CSL's distinctive red hull colour.
In 1997 Nanticoke and fleet mates Atlantic Huron and Atlantic Erie were temporarily modified for a special project. The work took place in Dartmouth at the IEL dock adjacent to the Woodside ferry terminal. The ships were fitted with pumps and bow un-loading gear so that they could be used to fill the gravity base of the Hibernia oil field's offshore production centre.
The huge structure was towed out to sea and once in position the three ships pumped a slurry of magnetite (a heavy ore) into the gravity base's cells, to gradually sink it in place. The extremely abrasive magnetite tore the pumps and pipes to shreds, but it was a one time project. Once completed the ships returned to Halifax where the gear was all removed and the ships returned to their normal lives.
Shortly after CSL began repainting their self-unloaders in red and in 1998 Nanticoke acquired the CSL colour which it has kept ever since.
In 2009 CSL signed a long term charter for the ship to carry salt form the Mines saleines in the Magdalen Islands and the ship was renamed Salarium, replacing the Saunière, which went for scrap. [The Latin world salarium meant a form of payment using salt as the currency, and it is from that word that our present day English word salary derives.]
Carrying salt is not necessarily a full time trade for the ship, so it is able to back haul other cargoes from time to time, but the salt must be stockpiled in advance for use on winter roads.
Salt can be a very destructive cargo for the ship's steel structure, and extra maintenance is usually required to keep the ship in condition. At 22* years of age the ship can expect a few more good years before the salt really takes its toll. [*=typo - should be 32 - thanks for the correction notices!]
.
Posted by Mac at 1:40 PM