Fusion - off for refit? 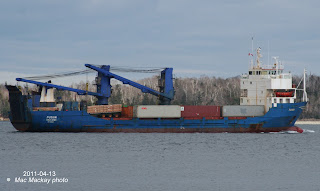 The Fusion, which runs a regular weekly service to St-Pierre et Miquelon, sailed a week ago for Ceuta, presumably for refit.
Her place is being taken by the general cargo ship Nils B. It has no RoRo capability, so everything must be lifted off and on. This will be a major nuisance for the month or so that Fusion will be away. Nils B was here in January 2008 with a heavy lift for the Shipyard, but as yet I have not managed a photo.
Fusion was built in 1977 and has carried 12 names in its lengthy career. It took over the St-Pierre service in 2007 (as Fort Ross) but was off the run for 2008-2010 when Dutch Runner was brought in.
When Fusion returned in August 2010 it was understood to be on a three year contract.
Posted by Mac at 10:17 PM