The header might have read "12,000 cars cause traffic jam in Halifax Harbour." But here's what really happened: 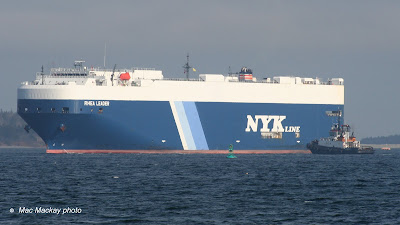 1. Rhea Leader begins to pick up her tugs at Middle Ground.

2. As she rounds Ives Knoll, Porgy has cleared Eastern Passage.

3.By the time Rhea Leader reaches Indian Point Porgy has passed Ives Knoll and is outbound.

One autocarrier leaving and another arriving and passing each other in the harbour, with a cruise ship inbound (see following) and a big tanker plunk in the middle of anchorage number one created quite a potential traffic jam in the harbour this afternoon. All was handled adroitly and no incidents resulted, but it was a pleasant change to see so much activity at once.
First inbound was Rhea Leader picking up her pilot about 1700 hrs and making her way up to the Middle Ground where she was met by the tugs Atlantic Willow and Atlantic Larch.
Meanwhile the Porgy was getting away from Autoport with assistance from Atlantic Oak.
As Porgy cleared Indian Point Rhea Leader was making her turn around Ives Knoll. Due to the Jasmine Knutsen at anchor, Porgy headed north about the ship and headed outbound. with Atlantic Oak standing off her quarter to assist in the turn.
While all this was going on Balmoral, took her pilot at 1715 hrs and was inching her way inbound, meeting Porgy at Middle Ground.
Neatly done!
The punch line of course is the capacity of these two large autocarriers: