The general cargo ship Acadia Desgagnés arrived at pier 25 this morning to be reflagged back to Canada after spending the winter flying the Barbados flag. Transport Desgagnés acquired the ship a year ago with the intention to operate it for part of the year in Canadian waters and to trade internationally the rest of the year. This has been a successful pattern for the company with half a dozen of its ships earning their keep elsewhere in winter, but returning to home waters for the summer and into the autumn. (Fleet mate Rosaire A. Desgagnés arrived in Halifax May 2, 2018 for its reflagging back to Canada.) 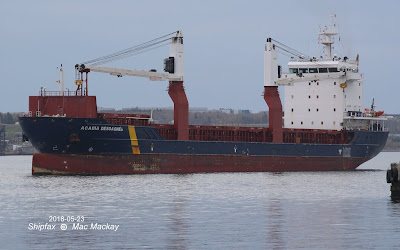 Acadia Desgagnés was built in 2013 by Shandong Baibuting in Rongcheng, China. It was ordered as Montelena, but the name was changed during construction to BBT Ocean but was changed again before it was launched as Sider Tis. It initially flew the flag of Panama but that was changed to Malta in 2014. Transport Desgagnés took delivery and renamed the ship in Ravenna, Italy in March 2017 and it arrived in Shelburne, NS April 30, 2017. It was then refitted for Canadian service and registered in St.John's, NL, May 12, 2017. It is smaller than Desgagnés' northern supply ships at 7875 grt, 10,936 dwt (11,353 at summer draft of 8.46m) but has box shaped holds and a pair of cranes rated at 40 tonnes. It can carry container, break bulk or bulk cargoes.It is rated as ice class 1D by Lloyd's which is the lowest ice class rating. 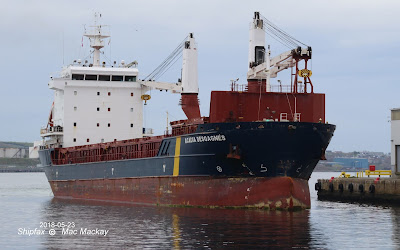 Desgagnés also bought the Argentia Desgagnés last year and it arrived in Halifax June 19, 2017 to be reflagged from Turkey. The forner Ofmar is a 6369 grt, 8950 dwt ship of the same type, although its 35 tonne cranes are mounted on the ship's centre line. Both ship are registered in Newfoundland, since they are intended for trade on the east coast and into the Lakes, rather than the traditional Desgagnés northern supply work. They will carry salt, minerals, coal, grain and similar bulk cargoes replacing the two older ships Amélia Desgagnés and Mélissa Desgagnés.


Their area of trade explains their non-typical names - most Desgagnés ships are named for people. (The first names - usually women's names, and not necessarily members of the Desgagnés family - are then compounded with the Desgagnés family name. A similar system of naming is used by Moran Towing in the US. These names will drive genealogists crazy in coming years, since there are no actual people with these fabricated names.)