The weekly transatlantic container service operated by jointly by Maersk and CMA CGM usually calls in Halifax on Saturday - sometimes on Sunday- eastbound back to Europe after calling first in Montreal.
This weekend however no ship showed up.

Of the four ships on the route it was the turn of  Maersk Patras to call, but it is still westbound and not due in Montreal until tomorrow. The next ship in the rotation Maersk Penang is also due in  Montreal which creates a sort of double header for them - and possibly for us for next weekend. 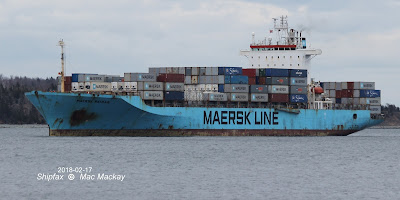 Maersk Patras was looking particularly rugged on its April 14 call.

This a particularly challenging route for ships, but they somehow manage to meet schedule reasonably well, despite the rigours of North Atlantic weather and St. Lawrence River ice.  There have been some really late calls this past winter (and only one missed - April 7) - likely due to severe weather- and that may be the case this time as well. However all three Maersk ships (the third is Maersk Palermo) are twenty years old and mechanical issues may also be a factor.

The trio are due for their Twenty Year drydocking and surveys this year, and it would not have been a surprise to hear that they were headed for scrap. However at the present there is aworld wide shortage of ships of their size (recent scrappings tipped the balance) so the ships will get an extended lease on life.  Replacement (s) during the drydockings have not been published yet, but some juggling will be required as Maersk Penang goes in June, Maersk Palermo in August and Maersk Patras in September.
The fourth ship is provided by CMA CGM, the charter EM Kea. A much newer ship, was built in  2007. 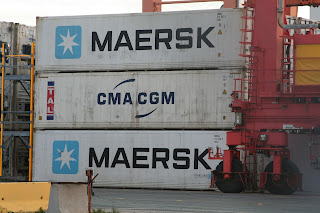 The Maersk/ CMA CGM service got a break in the finalizing of the Canada Europe Free Trade Agreement  (CETA). The agreement nowallows ships to load empty containers in Montreal and - on a non-revenue basis - offload them in Halifax. This was previously not allowed under Canadian cabotage rules, forcing the company to send them by truck or rail, when more empties were needed in Halifax. No other ports were named in the CETA agreement, so for example MSC, which calls in Montreal and Saint John, apparently cannot benefit from the same clause.