Ultra Angel gets a trim

The bulk carrier Ultra Angel arrived last evening and anchored in the lower harbour. Today is appeared that the ship was not in port for the usual reason of bunkers or Asian Gypsy Moth inspection, but instead for some underwater work, possibly hull cleaning. 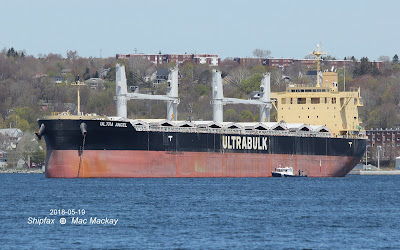 The hatches are cracked open to allow for some hold cleaning and ventilation and there is a diving tender alongside.

The ship is relatively new, delivered less than a year ago by Shin Kurushima, Toyohashi to Eternity Maritime SA (Fukunaga KKK managers). Classed as a Supramax bulk carrier, it has a grt of 35,025 and a dwt of 61,298. It carries four cranes and clamshell buckets for cargo handling.

The ship works in the Danish Ultrabulk fleet, part of the Ultra Group which controls the operation of more than 150 ships, mostly bulk carriers, but also small tankers. 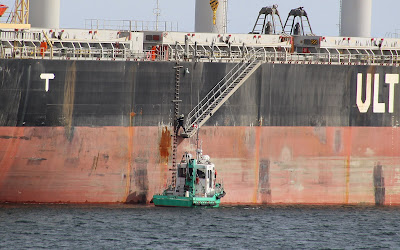 With the duty pilot boat already out at the pilot station Dominion Diving's Halmar delivers the pilot to the ship. The pilot is just making the move from the pilot ladder to the accommodation ladder as a crew member on deck awaits developments.


The ship was well out of the water and it was a long climb for the pilot as he boarded for a 5 pm sailing. Next port is given as Saint John, NB, which would mean a cargo of potash. Potash must be one of Ultrabulk's favoured cargoes as two of their ships carry the improbable names of Ultra Saskatchewan and Ultra Saskatoon. 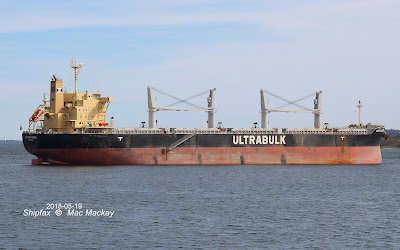 The ship's last port is not confirmed, because various sources give differing information, but it might have been Conakry, Guinea.