As reported last weekend there was no ship arrival on the Maersk - CMA CGM transatlantic service. This weekend there were two ships, and they were not in the regular order. Maersk Patras, delayed somewhere en route, arrived in Montreal last weekend after the next ship in rotation, Maersk Penanag had arrived.

Therefore the first caller here this weekend was Maersk Penang which arrived and sailed on Saturday - its regular day. 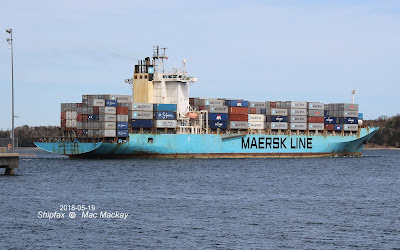 Today it was the turn of the tardy Maersk Patras.With so much time lost, it will be impossible to make up so the "double header" will apparently continue until the ships rotate out for drydocking. Another ship will be added to the rotation starting next month to ensure that there is no skipped week. Reliability of schedules is one of the hall marks of container shipping, but punctuality has taken a beating of late on many routes - particularly where giant ships are replacing several smaller ones. All it takes is one of those giants to be held up and the impact is serious. Even on the east coast North America trade on-time reliability was just 66.3% in 2017 according to recent statistics. Maersk beat the average with 70.5%. Transatlantic services were only in the 67% (westbound)  to 70% (eastbound) reliability range in 2017. These numbers show about a 10% drop in on-time performance from 2016.