The annual arrival of the herring seiners is a sure sign that summer must be on the way. As the boats follow the migratory fish northward in late May and early June they usually put into Halifax. If the fish are close by they will unload their catch here.
At mid-day today there were three boats in Halifax. 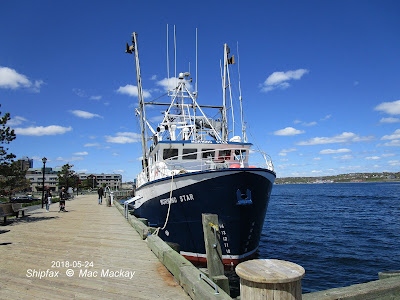 Note the prominent paravanes, in the stowed position. These movable outriggers are now seen in one form or another on all the smaller boats and are used to steady the craft when it is at sea.

Morning Star is one of the newer smaller boats, built in 1991 in Caraquet it measures 180 grt and fishes out of Yarmouth, NS. 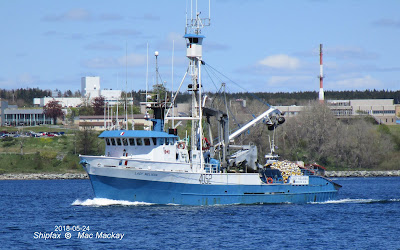 On the other hand Lady Melissa is the largest boat in the fleet. It was built in Pictou in 1980 and is operated by Comeau's Seafoods Ltd of Saulnierville, NB. 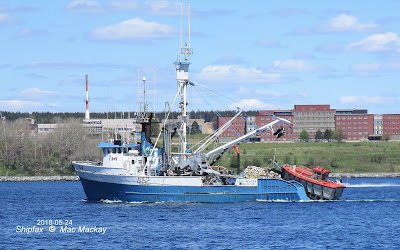 Lady Melissa did some trials in the harbour this afternoon, allowing for a good view of the boat's huge seine net stowed on deck aft and its bug boat perched on the stern.

A third boat, Sealife II, was also in port today.
Other boats, from the southwestern coast of New Brunswick, mostly from Grand Manan Island are also frequent callers.
Posted by Mac at 3:50 PM