A number of ship movement are taking place Friday afternoon, and several at the same time, so only some will receive notice here. Some moves may have been due to the upcoming holiday Monday.

A late posted arrival this morning was MOL Partner. The 71,902 grt, 72,968 dwt ship arrived from Colombo, via the Suez Canal on THE Alliance EC5 service, again apparently replacing a regular ship in the rotation as part of the Japanese container line merger. Built in 2005 by Koyo Dockyard Co in Mihara, it has a capacity of 6350 TEU, including 500 reefers.

The ship anchored in Bedford Basin at first then is to move to Fairview Cove on departure of  Brevik Bridge. YM Modesty is also in at Fairview Cove - all for THE Alliance.

Later in the afternoon Algoma Integrity made its first arrival in Halifax. Built as Gypsum Integrity in 2008 by Estaleiro Ilha SA in Rio de Janiero, the self-unloader was built to the same spec as Gypsum Centennial. Both ship were operated by Gypsum Transportation, the cargo carrying division of Canadian Gypsum / United Sates Gypsum. When that company closed up its Canadian mines, first in Hantsport than in Grand Narrows, the ships were out of work. However Joint Venture partners in Beltship Management, Globe Master, found other work for the ships shuttling iron ore in Afrcia. At the end of that operation Algoma Transportation acquired the ship in 2015 originally as a two year stop gap until new ships were delivered. Registered as Algoma Integrity in Hamilton, ON on April 23, 2015 the ship was dedicated to running from Port Cartier to Contrecouer, QC. Last December the ship was laid up for the winter in  Montreal. On April 26, 2018 its Canadian registry was closed and it was transferred to Algoma's international fleet to work in the CSL pool of ocean self-unloaders under the Bahamas flag.
A 33,047 grt, 47,761 dwt ship it had many innovations when built including a telescoping self-unloading boom.

After a busy stretch at Autoport this week, the Wallenius Wilhelmsen Tugela sailed. Classed as a Large Car and Truck Carrier, the ship first berthed at pier 31 Wednesday and offloaded wheeled machinery. It moved to Autoport yesterday. 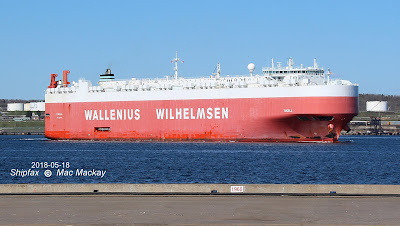