THE Alliance's EC5 service, running from the Far East to East Coast North America via the Suez Canal  operates with a squadron of 11 ships to ensure a weekly schedule. THE Alliance is (now) a partnership between HAPAG-Lloyd, Yang Ming and ONE. The latter is the merged entity of the primary Japanese carriers Kawasaki Kisen Kaisha (K-Line), Mitsui Osaka Shosen Kaisha (Mitsui OSK Line or simply MOL) and Nippon Yusen Kabushiki Kaisha (NYK Line). 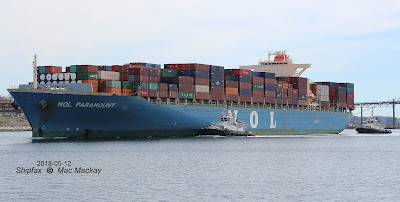 Since April 1 ONE has replaced two of the ships in the rota. NYK Atlas has been replaced by Crete 1, which made its first call April 6 (westbound) returning April 18 (eastbound).
NYK Artemis has been replaced by MOL Paramount with its first call today (westbound). This is not the first time the ship has called in Halifax. That was July 21, 2010 when it was slotted into a previous alliance. It also called here for a time starting in 2014 for the G6 Alliance, which THE Alliance replaces.

Once into Bedford Basin the tugs begin to swing the ship around to berth at Cerescorp's Fairview Cove container terminal.

MOL Paramount's predecessor on the route, NYK Artemis made its last calls January 21 and February 2.
It had been on the SE3 service with the G6 Alliance until April 2017, before making its first appearance on  THE Alliance's EC5 service June 3, 2017.