There were three ships of note in Halifax today:

1.     The oddly named Gravity Highway made its second visit to Autoport today. The first was in February 2017 but that arrival was not mentioned in these pages. K-Line car boats use "Highway" in their names for obvious reasons, but the word "Gravity" may need some explanation.

There are many places in the world where the eye plays tricks on the brain, giving the impression that cars move uphill without the aid of an engine. Various explanations have arisen - some involving ghosts, aliens, or magic formulae. In New Brunswick Magnetic Hill was long a famous tourist draw. There is at least one of these places on the North Mountain of the Annapolis Valley in Nova Scotia too - but I am not sure it has a name. Some of the locations are known as Gravity Hills so that is the origin of the ship's name.

Gravity Highway was completed in 2014 by Hyundai Mipo, Ulsan, for Ray Car Carriers and has a capacity of 7700 CEU, while measuring 58,767 grt, 21,000 dwt. It's completion almost didn't happen however after a serious accident during its trials trip.

On December 29, 2013 while only about 9 miles from Busan, the ship "T-boned" the Hong Kong flagged tanker Maritime Maisie which immediately exploded and caught fire. Fortunately an intensive rescue effort recovered all 27 crew from the tanker and the 64 trials personnel from the auto carrier with only minor injuries. Gravity Highway only suffered some superficial fire damage, and was soon completed and delivered.

However things were different for the tanker. It took nearly 19 days to bring the fire under control because fire fighters did not know that water would not extinguish the 4,000 tonnes of burning peraxylene and acrylonite. Not only that but the latter chemical, when heated, undergoes explosive polymerization and releases hydrogen cyanide, a carcinogen.

While firefighting was going on, the ship drifted into Japanese waters, and a long process began to find a port of refuge where the ship would be allowed to offload the remaining 26,000 tonnes of chemicals and 240 tonnes of fuel before the ship broke up - which it was in danger of doing due to severe hull damage.

Finally, after 102 days and negotiations with nine different potential ports of refuge, the port of Ulsan accepted the ship and it was lightered off in a ship to ship transfer. The tanker was rebuilt and renamed Corona and is still sailing.


2.      Hebridean Sky can only be described as a mini-cruise ship. More yacht-like in size and character, it has a long history of unsuccessful occupations, however seems to have found its niche with current owners Noble Caledonia Ltd. 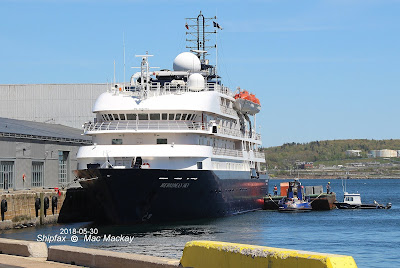 The tug Belle-D. and barge alongside Hebridean Sky at pier 23 to offload refuse.

The 4200 grt ship was built in 1991 by Nuovi Cantieri Apuania, Marinada Carrara as Renaissance VII for the Renaissance Cruises fleet. That operation failed and the ship was tried out by a variety of owners and charterers carrying the names 1992: Regina Renaissance, 1998: Renaissanace VII, 2001: Renai I, 2003: Sun, 2004: Island Sun, 2005: Corinthian II, 2013: Sea Explorer and 2014: Sea Explorer I.
Noble Caledonia, which is a partnership of the Noble and Salén families, had success with two sister vessels (Renaissance VI renamed Caledonia Sky and Renaissance VIII renamed Island Sky) and acquired the ship, gave it a major refresh and introduced it last year as Hebridean Sky.

With a capacity of only 120 passengers and 72 crew, the ice class vessel caters to the luxury exotic cruise market with trips to the Arctic and Antarctic.

3.    After a long weekend visit in Halifax to commemorate the United States' Memorial Day, the US Navy Los Angeles class fast attack submarine USS Toledo SSN-679 sailed this afternoon from its berth at Shearwater. The sub arrived last Friday and crew members participated in a ceremony Monday on Deadman's Island (now a peninsula) where 195 American prisoners of the War of 1812 were buried. They were imprisoned on the adjacent Melville Island, now joined to the shore and part of the Armdale Yacht Club, where some original buildings are still standing. 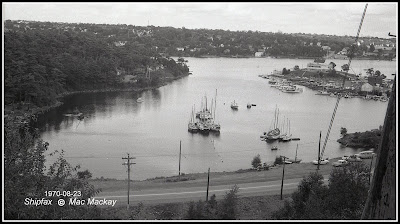 A view of Melville Cove was still possible from the Herring Cove Road in 1970. Trees obstruct the view now. That is Melville "Island" to the right, and the Armdale Yacht Club. Deadman's Island is out of the picture far to the right.


Toledo was assisted away from Shearwater by the tugs Granville and Listerville and several small craft including 127. 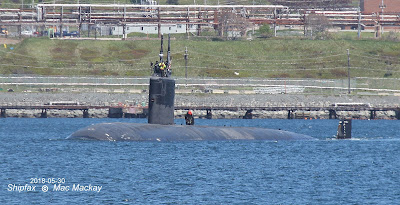 Once clear of Eastern Passage the deck crew retired below through a flush hatch, leaving a very tight crowd on the open bridge. (One of whom is a civilian pilot) 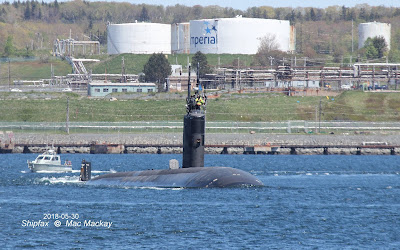 Patrol vessel Guardian and the tug Glenbrook accompanied the sub to the pilot station.

After rounding Ives Knoll Toledo began to pick up speed. Its reported surface cruising speed is 25 knots, and its submerged speed is acknowledged to be in excess of 30 knots.

USS Toledo has four torpedo tubes and 12 Tomahawk missile silos for vertical launch.This is its second call in Halifax that I am aware of. It was here in September 2016.