CSL Tarantau arrived this morning for National Gypsum. The ship is sporting a fairly recent hull paint job, improving greatly on its look the last time it was here. 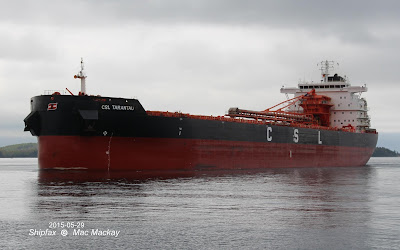 The ship was built as Balto in 2013 for Klaveness Selfunloaders AS of Norway, then members of the CSL self-unloader pool with Algoma and Oldendorff, to a standard CSL Trillium class design. The 43,691 grt, 71,405 dwt ship was fitted with an 80m boom and can unload at speeds ranging from 4200 tonnes per hour for coal up to 6,000 tph for iron ore. Gypsum goes at 4,500 tph.
Builders Chengxi Shipyard in Jiangjin certainly skimped on the paint which deteriorated rapidly once the ship was in service. In 2015 Klaveness opted to leave the CSL pool and their ships were taken over by Algoma and CSL. CSLAmericas took Balto and renamed it in 2016. When the ship arrived in Halifax October 14, 2016 under the new name, Shipfax noted the newly painted CSL funnel colours, but that the Klaveness orange hull paint would likely have to wait for a scheduled 5 year drydocking to be redone.
Shipfax/2016/10/14, csl-tarantua-ex-balto.html
That appears to have happened in March this year, so the ship looks quite respectable now. The deck, fittings and self-unloader apparatus will be left for the crew to paint, but the orange actually looks quite good, though not typical for CSL. 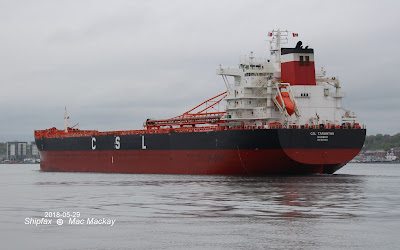 CSL continues to expand its international self-unloader fleet. They announced just this week that they are partnering with the German company Hartmann to build a 40,000 dwt self-unloader at Chengxi Shipyard in China.The ship will have a forward mounted self-unloader, a feature of smaller ships of the type, and will work under charter to Mibau Stema Group (Hartmann and Heidelberg Cement AG)  delivering aggregates in Europe.