The Newfoundland based tanker operator Coastal Shipping Ltd, has acquired two tankers for its fleet this spring, to replace older units that have been sold. The first of the two additions arrived in Halifax today (May 8) for Asian Gypsy Moth inspection, with a cargo of refined petroleum product from Emden, Germany. 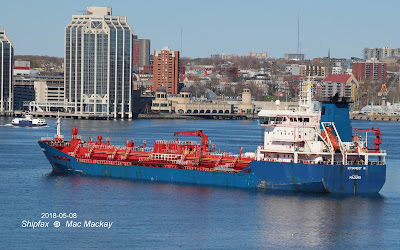 Named Kitikmeot W the ship's new name reflects two aspects of Coastal's operations. The first is that it supplies fuel to far northern communities during the short summer navigation season. Kitikmeot is the name of a large administrative region covering the north and western portion of the Nunavut territory. Although geographically large (171,150 square miles) it is sparsely populated by 6,543 people. It has several settlements that are well known by their former names including Cambridge Bay (Iqaluktuutiaq) and Gjoa Haven (Uqsuqtuuq). Kugaaruk (Pelley Bay), Kugluktuk (Coppermine) and Taloyoak (Spence Bay) are the other hamlets in the region. The entire region is accessible only by air or by sea (in season).

The letter "W" denotes the Woodward family, founders of the Woodward Group and owners of Coastal Shipping. It has been many years since the company used the letter "W" in its ship's names , so it is a nice touch to recall some of the early Woodward tankers such as Jenny W and Sibyl W.

Kitikmeot W was built in 2010 by Icdas in Biga, Turkey and measures 13,097 grt, 19,983 dwt. It sailed as Icdas-09 until acquired by Woodward. A sister tanker Icdas-11 has also been purchased by Coastal Shipping, but has not joined the fleet yet.

Although founded in Happy Valley-Goose Bay, Coastal Shipping operate its tankers from Lewisporte, NL and it is expected that the ship will head there for transfer from Marshall Islands to Canadian registration.

Tana Woodward was built in 1956 by Rowhedge Iron Works in Essex, England as Ben Bates. Before Woodward's Oil Ltd acquired the ship in 1973, it had been lengthened increasing its grt from 489 to 522.It was laid up in 1986 and scrapped by Unimetco in Point Edward, NS. 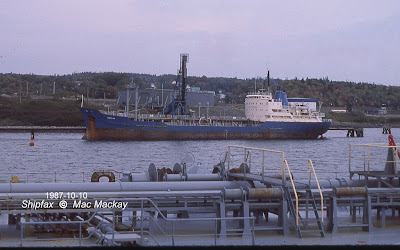 Sibyl W (i) was the former Imperial Quebec, built by Collingwood Shipyard in 1957. It was rebuilt with a bulbous bow when the St.Lawrence Seaway was opened and served Imperial on the east coast and as faras Venezuela until 1987. Woodward's made many northern trips with it to such ports as Frobisher Bay (Iqaluit). In 1992 it was sold to become Panama Trader and was finally broken up in Guyamas, on the Baja Gulf coast of Mexico in  1996.

A second Sibyl W, acquired in 1992 was also a former Imperial Oil tanker. Imperial Tofino dated from 1973 when it was built in North Vancouver. It was lengthened 28 feet in 1979 raising tonnage from 650 to 764 grt.

After Woodward service it went to the Honduran flag in 2009 as a bunkering tanker on the Atlantic side of the Panama Canal. It was reported sold in late 2016, but nothing further has been heard of it. 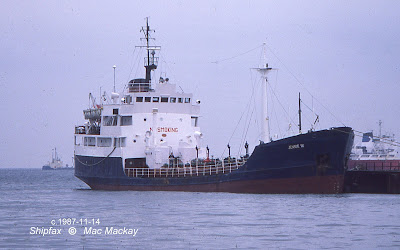 Jenny W was a former Shell tanker, built in 1965 by Grangemouth Dockyard as Falmouth It became Shell Mariner in 1980 and joined Coastal Shipping Ltd in 1992. The 982 grt ship was sold in December 1995 to a Peruvian company. The delivery crew eventually arrested the ship in St.John's for unpaid wages and it was sold at auction in May 1999 becoming Orfeo.under the Mexican flag. On January 14, 2005 it was wrecked while entering the port of Coatzacoalcos, Mexico.