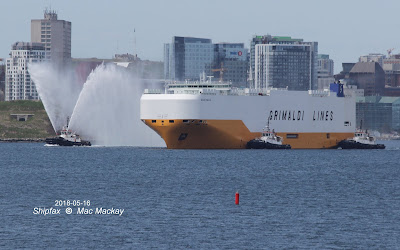 Arriving in the harbour it had to wait for the departure of Delhi Highway. Once that ship was clear of Eastern Passage, Grande Halifax began to make its way toward Autoport.The tug Atlantic Bear then began an impressive water display. This was one of the more spectacular such shows seen in Halifax for some time. 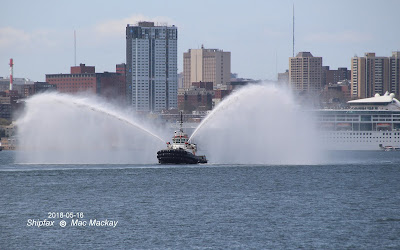 Once near Autoport tugs swung the ship around to display its side ramp, painted yellow on the underside. Compared with the rather business like look of K-Line auto carriers, Grande Halifax, certainly stands out in port, but probably also at sea. 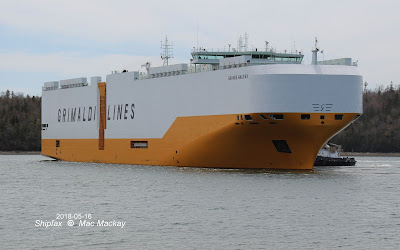 The Grimaldi Group took delivery of Grande Halifax January 10, 2018 from the Jinling Shipyard in Nanjing, China. There was a plan to sail the ship into Halifax January 14, but this was scrubbed due to bad weather. The ship had no cargo for Halifax on that trip, so it continued on to its next port. Measuring 62,134 grt, 18,353 dwt, the ship has a capacity of 6,700 cars.It also has four hoistable car decks and a 150 tonne capacity stern ramp to accept larger loads. 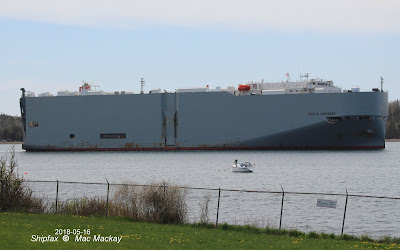 At a celebration to be held aboard the ship this afternoon, the Grande Halifax will be welcomed to Halifax, with Halifax Port Authority CEO Karen Oldfield as godmother. There will be a blessing of the ship and various dignitaries will give speeches. Grimaldi Group also owns Atlantic Container Line, an important customer of long standing in the port. ACL inaugurated container and RoRo service in Halifax in 1969 and are sure to be feted large next year when the Port celebrates the 50th anniversary of container shipping in Halifax.