The Carnival Horizon made its Halifax debut today. Delivered  March 28 by Fincantieri, Marghera, Italy, the second Vista class ship in the Carnival fleet made its first cruise in the Mediterranean starting  April 2, then started its current 14 day transatlantic cruise from Barcelona. 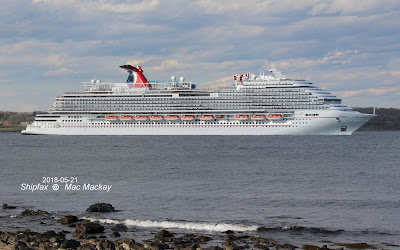 At 133,596 grt, the ship is smaller than last month's giant Norwegian Bliss (168,028 grt) but still offers its passengers a bewildering array of experiences on 15 deck levels - too many to list here.

Its capacity of 3,960 passengers (double berth) requires a crew of 1,450 to cater to their needs and run the ship itself. The 1,055 ft long vessel is powered by five MAN diesel engines, plus an exhaust gas powered steam turbine, feeding two electrical gen sets that it turn deliver 62,400 kW (83,680 bnp). Actual propulsion comes from a pair of 16,500 kW azipods for a service speed of 18 knots and maximum speed of 22.6 knots.  The engines are of course energy efficient and have exhaust gas cleaning. 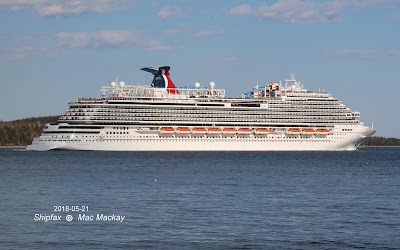 This call in Halifax is the only one the ship will make before starting its regular work of six to eight day cruises from Miami.