Melfi Marine serves Cuba from Italy, Spain and Portugal via Halifax. It has used a variety of ships over the years on short and long term charters. In March of this year the Macao Strait completed its charter after a particularly long run, making its first visit in November 2014.
New charters started late last year for two ships, Jona and Catharina Schulte. The latter made its first calls on February 12 and April 5. I wasn't able to get photos on those days, but did manage to catch it getting away this afternoon. Melfi numbers its ship's voyages and this is Voyage 004 for for this ship (it did not call in Halifax on Voyage 001). 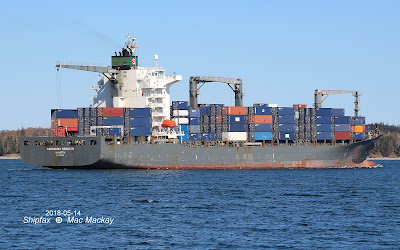 Catharina Schulte was built in 2006 by STX Shipbuilding Co in Jinhae, but was soon renamed Cape Bon, likely for charter to Hamburg-Sud. In 2012 it was returned to its original name, flying the flag of Malta. The ship has a capacity of 2602 TEU and has four 45 tonne capacity cranes and tonnages are 27,093 grt, 34,600 dwt. A fairly large ship for Melfi, it reflects the recent increase in trade with Cuba. 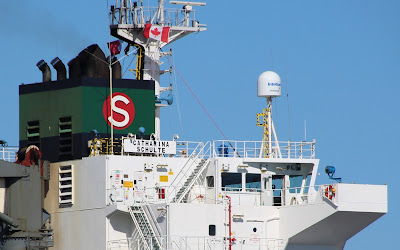 The Schulte Group now numbers about 100 owned ships of all sizes and types and manages about 620 ships for other owners. It was established as long ago as 1883 and its funnel mark is well know in nearly every port in the world.


Perhaps less well known is the Greece based TMS Tankers Ltd, with a fleet of about 50 ships. It falls under the ownership of the TMS Group of George Economou, that includes several shipping companies in tankers and drybulk. Despite that, its ship the Malta-flaged Lacerta, which arrived yesterday, is reported to be on a charter to Stena WECO, a Danish based operator of about 65 tankers, at a rate of $14,750 per day.

A typical Mid-Range1 product tanker of 29,795 grt, 49,666 dwt, the ship was built by SPP Shipbuilding Co in Sacheon, South Korea.  Unusual for tankers arriving at Imperial Oil, its last port was Ijmuiden, Netherlands, the sea lock for Amsterdam.

It was the only ship to arrive or depart from Halifax yesterday - an unusually quiet Sunday in the port.