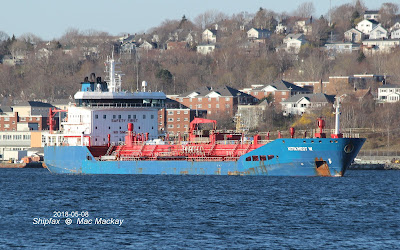 Kitikmeot W getting under way from anchorage for Argentia with a chemical cargo.

Since making yesterday's post on Coastal Shipping Ltd's latest acquisition, the tanker Kitikmeot W, I have learned that the company has acquired three tankers, not two. I mentioned that a sister of Kitikmeot W, the Icdas-11 has been purchased, but not delivered yet, nor renamed as far as I know.

The third tanker is to be named Tuvaq W. It is currently sailing under the Swiss flag as San Pietro. Built in 2012 by Taixing Ganghua as Bering it was acquired and renamed by the current owners in 2013. It is a small ship of 5422 grt, 7598 dwt, and will be used to supply some of the ports that larger ships cannot service.

Once again the ship's new name has significance for Coastal Shipping and the Woodward Group, recalling a previous ship named Tuvaq and using the letter "W" for Woodward.

The first Tuvaq was an impressive ice breaking tanker, built in 1977 by Werft Nobiskrug in Rendsburg, Denmark, for Neste O/Y of Finland. Neste was a pioneer in winter navigation in the Baltic and the ship was built to operate without icebreaker assistance when the Baltic was iced in. It was named Tiira by Neste and measured 10,929 grt, 15,954 dwt and was powered by two V-12 Atlas engines delivering 15,600 bhp through controllable pitch propellers. Neste thought enough of the ship to re-engine it in 1997 with new MaK engines giving 15,999 bhp. Such a major expenditure is unusual in a twenty year old ship.

Coastal Shipping purchased the ship in the autumn of 2002 for delivering their own petroleum products, but also for chartering out to others. It was registered in St.John's, NL February 14, 2003 and named Tuvaq. The word means edge of the ice, an important interface in the arctic where sea life is abundant. Under Canadian registry the ship measured 11,290 grt.

The ship made many northern trips for Coastal, but also did charter work with Ultramar and likely others, and made some trips to the Great Lakes.

In early 2013 Coastal sold the ship to Panama flag owners called Tuvaq International Inc, and the Canadian register was closed June 11, 2013. Identified as a crude oil carrier by this time, the ship's movements have been difficult to trace, but by October 2015 it was laid up in Magdalene River, Barranquilla, Columbia, apparently abandoned.

The new Tuvaq W has sailed from the Netherlands as San Pietro and is due in St.John's, NL next week where it will be brought under Canadian flag and renamed.
Icdas-11 is reported anchored in Singapore.

To make room for all these ships in the fleet, Coastal has recently sold Nanny (register closed March 9, 2018) and Travestern (registry closed March 19, 2018). These follow the sale of Alsterstern in April 2017 and Havelstern in October 2017.

Of these one recent caller here was Nanny, which brought in several loads for Wilson's Fuel from Come by Chance in 2015 and 2016.

Built in 1993 by Hyundai Ulsan, as Natalie Sif, the 6544 grt, 9176 dwt ship also called in Halifax in 1998 under its original name and Danish flag.  After leaving the Coastal fleet it sailed to Taipei, Taiwan.

The Coastal fleet also includes the Sten Fjord, 8882 grt, 13,670 dwt, built in 2004 as Falcon by Jiangyang, Shanghai, which joined the fleet in June 2017. It has been chartered out over the winter, and is en route from Montreal to Estonia but is expected back in Canada in time for summer arctic work.