Maersk skips a beat (again) and adds a number

The weekly Maersk / CMA CGM  "Canada Atlantic Express" transatlantic service skipped a Halifax call again this past weekend as it did two weeks ago. That was partially made up for with a double call one week ago. However it seems that the schedule will be in a muddle for some time to come.

It all started when Maersk Patras was a week late arriving in Montreal on the westbound run, arriving at about the same time as the next ship in the rotation, Maersk Penang. After discharging in Montreal, both ships made their way to Halifax, but the Maersk Penang arrived first, on May 19 - on schedule, effectively "lapping" the Maersk Patras. However Maersk Patras then arrived on May 20- still a week late.
This week it was the turn of EM Kea (the CMA CGM representative on the route), but it skipped Halifax entirely and sailed from Montreal direct for Bremerhaven. 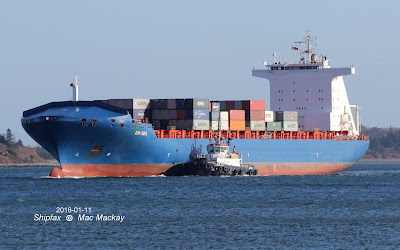 EM Kea on an previous call in Halifax.

EM Kea joined the rotation July 25, 2015 and has been a reliable ship after several previous CMA CGM ships could not keep up the gruelling pace of a weekly transatlantic service. Built by Stocznia Szczecinska Nowa in 2007, the 35,824 grt, 42,166 dwt ship has a container capacity of 3108 TEU. It carried the names Cap Norte from 2007 to 2012 then Cap Egmont to 2015, suggesting charters to Hamburg-Sud, before taking its present name for Kea Trading Ltd, with Eurobulk Ltd of Athens as managers.Kea Trading Ltd morphed into Kea Seaways Ltd at the end of 2017.

Maersk and CMA CGM have announced a new service from the Mediterranean. Since 2017 the two lines had slot arrangements on another service to Montreal operated by HAPAG-Lloyd. However those arrangements do not always suit the needs of competing companies. Maersk and CMA CGM working together under the banner of the 2M Alliance, will start a new joint service from Salerno, La Spezia, Fos and Algeçiras to Montreal returning eastbound via Halifax to Valencia.
HAPAG-Lloyd needs six ships to maintain their service, but the new Mediterranean-Montreal service will use five Maersk ships starting in July, with the first call in Montreal July 19 and Halifax likely around July 26.